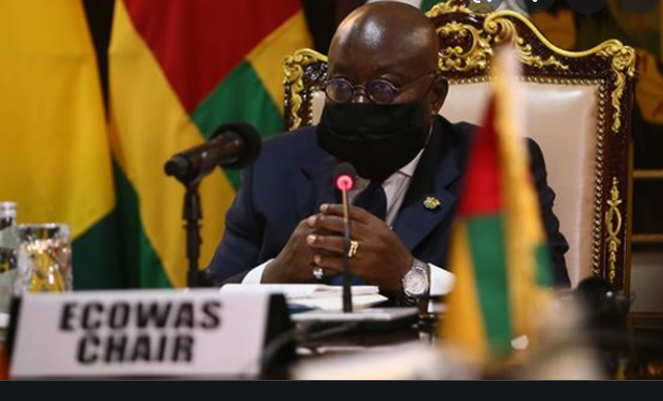 The Chairman of the Economic Community of West African States (ECOWAS), President Nana Addo Dankwa Akufo-Addo, has called for solidarity and an international coalition to halt the political turbulence in the ECOWAS region and on the African continent at large.

He bemoaned the evolution of coups d’etat which challenged the democratic way of life “we have chosen” and urged the Heads of State and Government of ECOWAS to address the dangerous trend collectively and decisively before it devastated the whole region.

President Akufo-Addo, who was addressing the opening session of the second Extraordinary Summit of the Authority of Heads of State and Government of ECOWAS on the political situation in Burkina Faso in Accra yesterday, acknowledged that the resurgence of coups d’etat in the region was a matter of grave concern.

“This evolution challenges the democratic way of life we have chosen. We need to stand firm to protect democracy and freedom in our region.

Your presence here is a strong indication of your willingness to find a sustainable solution to the resurgence of the canker in our region.

“Let us address this dangerous trend collectively and decisively before it devastates the whole region,” the President stressed.

The ECOWAS leaders, during the one-day summit, also examined the recent developments in Guinea and Mali.

The summit added up to a number of meetings held by the Authority of ECOWAS Heads of State and Government since the trend of coup d’etat reared its ugly head again in the region, first in Mali on August 18, 2020, Guinea on September 5, last year and Burkina Faso on January 24, this year.

Last Friday, the Authority of ECOWAS Heads of State and Government held a virtual meeting shortly after the bloodless coup in Burkina Faso which toppled President Roch Marc Christian Kabore.

The Accra Summit, according to President Akufo-Addo, was focused on emerging threats in the region stemming from military interference in Mali and its contagious influence in Guinea and Burkina Faso.

Recalling aspects of the virtual summit, the President said: “We suspended Burkina Faso from participating in ECOWAS institutions and requested the immediate release of President Kabore, who was detained alongside other political actors.

“During our summit, we reaffirmed our commitment to uphold the principle of zero tolerance to ascending to power through unconstitutional means and, therefore, demanded the restoration of the constitutional order by the military,” he added.

“To assess more accurately the security and political situation in Burkina Faso, we agreed to dispatch the committee of ECOWAS Chiefs of Defence staff led by the Ghanaian Chief of Defence Staff on January 30, 2022,” President Akufo-Addo said.

In addition, he said, a joint ministerial delegation, led by the Chairperson of the Council of Ministers, who is also the Minister of Foreign Affairs, Ms Shirley Ayorkor Botchwey, and including the President of the ECOWAS Commission, Mr Jean-Claude Kassi Brou, and the United Nations Secretary-General for the Sahel and West Africa, was also dispatched on January 31, this year, saying “their reports have been submitted for our consideration”.

While commending the African Union (AU) for its firm decision to suspend Burkina Faso from participating in AU organs and institutions, in line with the decisions of the ECOWAS Authority on the situation in Mali and Burkina Faso, the ECOWAS Chairman pointed out that the AU expressed strong support for the efforts of ECOWAS at addressing peace and security challenges facing the region, including the resurgence of military coups.

President Akufo-Addo said he was happy that the recent attempted military coup d’etat to overthrow the democratically elected government of President Umaro Sissoco Embaló of Guinea Bissau had failed, while the putsches were being rounded up.

He further applauded President Embalo “for sustaining the validity of democratic institutions of the Republic of Guinea Bissau”.

He was hopeful that the discussions would provide informed decisions that could reverse the deteriorating political trajectory in the region, characterised by democratic setbacks and fragility of the region’s security systems.

Giving the key points in a press conference after a closed-door session by the ECOWAS leaders, Mr Kassi Brou said the authority of ECOWAS Heads of State and Government, after studying the report presented by the two missionaries sent to Burkina Faso to meet with the military leaders, had asked the military leaders to “rapidly propose a timetable for the restoration of constitutional order in that country”.

He added that the coup leaders were also to unconditionally release President Kabore, who was detained alongside other political actors, while Burkina Faso remained suspended from ECOWAS institutions.

He said the ECOWAS leaders also decided to send a stabilisation force to Burkina Faso to help maintain the peace.

On the state of affairs in Mali and Guinea, the ECOWAS Commission President said the authorities were yet to receive an acceptable timetable that would facilitate the processes for an early transition and also lead to the lifting of the sanctions on the two countries.

Responding to questions, Mr Brou attributed the recent resurgence in the region to the “security pressure” in the Sahel which arose as a result of the instability in Libya.

He, however, indicated that the security pressure from activities of terrorists within the region which had brought with it a fragile security situation must not be the basis for the military to unconstitutionally remove democratically elected governments.

That, Mr Brou indicated, was against the tenets of ECOWAS protocols

“Let’s not fall into the illusion that coups d’etat will solve the problems; they cannot because we had experienced them in the past,” he emphasised, adding: “We need to address the security issue in the respective countries, and for that matter the entire region because it is destabilising the social fabric of those countries.”