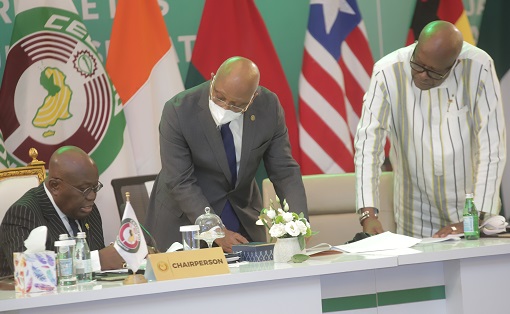 The Economic Community of West African States (ECOWAS) has imposed additional sanctions on Mali as part of measures to ensure the military junta in that country fast-tracks steps to return the country to constitutional rule to ensue peace and stability.

The sanctions include the withdrawal of all ECOWAS Ambassadors in Mali, the closure of land and air borders between ECOWAS countries and Mali and the suspension of all commercial and financial transactions between member states and Mali.

Others are the freeze of the assets of the Republic of Mali in ECOWAS central banks, freeze of assets of the Malian state, enterprises and parastatals in commercial banks and the suspension of Mali from all financial assistance and transactions from financial institutions.

The suspension of all commercial and financial transactions, however, excludes essential consumer goods such as pharmaceutical products, medical supplies and equipment, including materials for the control of the COVID-19, petroleum products and electricity.

In view of the potential destabilising impact of the new sanctions on Mali and the region, the authority has decided to immediately activate the ECOWAS Standby Force for any eventuality.

After the August 2020 military coup that toppled President Ibrahim Boubacar, ECOWAS suspended Mali from the regional bloc and imposed a travel ban, including the freezing of the assets of members of the transitional government of that country.

The imposition of the additional sanctions was the outcome of the Fourth Extraordinary Summit of the ECOWAS Authority of Heads of State and Government on the prevailing situation in Mali in Accra yesterday.

Others were Presidents Macky Sall of Senegal, Julius Maada Bio of Sierra Leone, and the Vice-Presidents of The Gambia and Nigeria, Dr. Isatou Touray and Dr. Yemi Osibanjo, respectively.

The rest of the member states were represented by their respective Foreign Ministers and Ambassadors.

At the moment, Guinea and Mali are suspended from the regional bloc.

Yesterday’s summit was necessitated by, among other reasons, the need to respond to emerging issues of the transition of power to civilian rule in Mali.

This follows the reneging of a promise by the military junta, led by Colonel Assimi Goita, to return Mali to democratic rule by organising presidential and legislative elections in February 2022.

The junta later informed ECOWAS that it could no longer adhere to the timetable it had earlier proposed and suggested that the transition be extended to five years.

Earlier President Akufo-Addo had said the regional bloc would take decisive decisions to ensure that Mali was returned to democracy within the agreed timetable.

He said since the junta had defied the timetable, it was incumbent on member states to act.

“I, therefore, hope that the outcome of our deliberations will contribute to promoting democracy and consolidating peace and security in Mali and our entire region,” he said.

According to the President, he had, on December 31, 2021, received a ministerial delegation from Mali, led by the Malian Foreign Minister, who had communicated the chronogram of the transition to him.

He said the delegation had informed him that a four-day national re-foundation conference initiated by the transition team in Mali had recommended that elections be held in that country within a period of six months to five years to restore Mali to democracy.

“Subsequently, in a letter dated January 7, 2022, the head of the transition team said that the transition period had now been modified to four years,” he said.

President Akufo-Addo explained that it was in line with that decision that ECOWAS met to determine whether Mali had complied with the agreement reached on September 15, 2020, as contained in the Transition Charter, and whether it conformed to principles as enshrined in the ECOWAS supplementary protocol on democracy and good governance.

At the last ordinary summit of ECOWAS in Abuja, Nigeria, on December 12, 2021, the regional bloc had reiterated its concerns on the democratic process in Mali and advised the transition authority to respect the date of February 27, 2022 for the holding of elections.