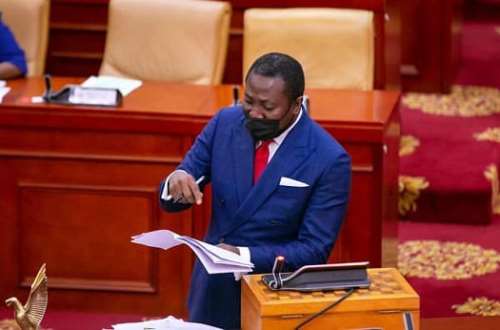 Deputy Majority Leader, Alexander Afenyo-Markin has said that the electronic transaction levy (E-levy) will be reduced from 1.75% to at least 1.5%.

According to him, the reduced charge was captured in the revised version of the 2022 budget submitted by the Finance Minister, Ken Ofori-Atta on Tuesday.

Speaking on PM Express, he said the reduction is a result of government listening to the concerns of the Minority in Parliament with respect to some concerns raised about the budget.

“We have agreed on the policy, Now government will come with a bill, in that bill we will go clause by clause and that is where the extended stakeholder consultation engagement will again come up. We will look at certain provisions and then deal with certain concerns,” he told Evans Mensah on Tuesday.

He said the reduction in E-levy will reflect at the enactment stage of the policy.

“Check the records of Parliament, in the NDC time, NPP time, the politics of this country… where it reduces into an enactment, it is like government announcing a policy. That policy will have to be executed implemented. The implementation process may require legislation, so it is when you come to the legislation that you fine-tune it. That is why you have to receive memoranda from the public,” he pointed out.

He added that “for nothing at all when it comes to the bill, we know that government has shifted from 1.75 to 1.5.”

This comes after Parliament on Tuesday approved the 2022 Budget Statement and Economic Policy of government presented by Minister for Finance, Ken Ofori-Atta on November 17.

The budget was approved in the absence of MPs from the Minority, who declined to participate in the business of the day.

In their absence, the Finance Minister, Ken Ofori-Atta re-submitted a revised version of the 2022 Budget, which was unanimously approved by the Majority MPs including the Speaker.

This new development comes after the rejection of the same budget by Parliament on Friday.

Meanwhile, the Leader of the Minority Caucus in Parliament, Haruna Iddrisu has revealed that his side could not reach a consensus with the Majority on the 2022 Budget because of the Majority’s refusal to review the proposed 1.75% e-levy.

Addressing the press on Tuesday, Haruna Iddrisu explained that the Minority and Majority held a joint caucus meeting to make some useful concessions towards the approval of the 2022 Budget.

He explained that during the deliberations, the Minority insisted that the proposed 1.75% e-levy should be reviewed at a more convenient rate in order to make life more comfortable for the generality of the Ghanaian populace.