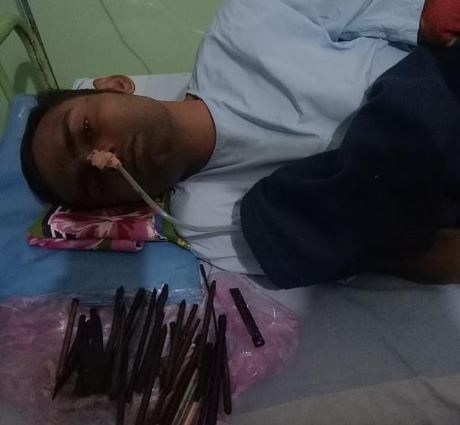 Doctors in India have removed 33 objects, including razors and knives, from the stomach of a 30-year old man identified as Yogesh Thakur.

Thakur was admitted to the hospital on July 14 after he complained of severe stomach pain. His mother, Kusma Thakur, told doctors her son would ‘grab anything and eat it’, leading them to conduct x-rays and doctors were stunned to find objects such as a knife, screwdriver, razor blades and plastic items inside Thakur’s stomach.

Two days later, doctors extracted all the objects in an operation and Thakur, a part-time farmer, is now recovering and will receive psychiatric help.

Doctors said it’s likely he suffers with acuphagia, a disorder in which people eat sharp or metal objects and other items they can’t digest.  Acuphagia is a category of pica, an eating disorder whereby the person cannot help eating non-food items such as dirt, talcum powder or paint.