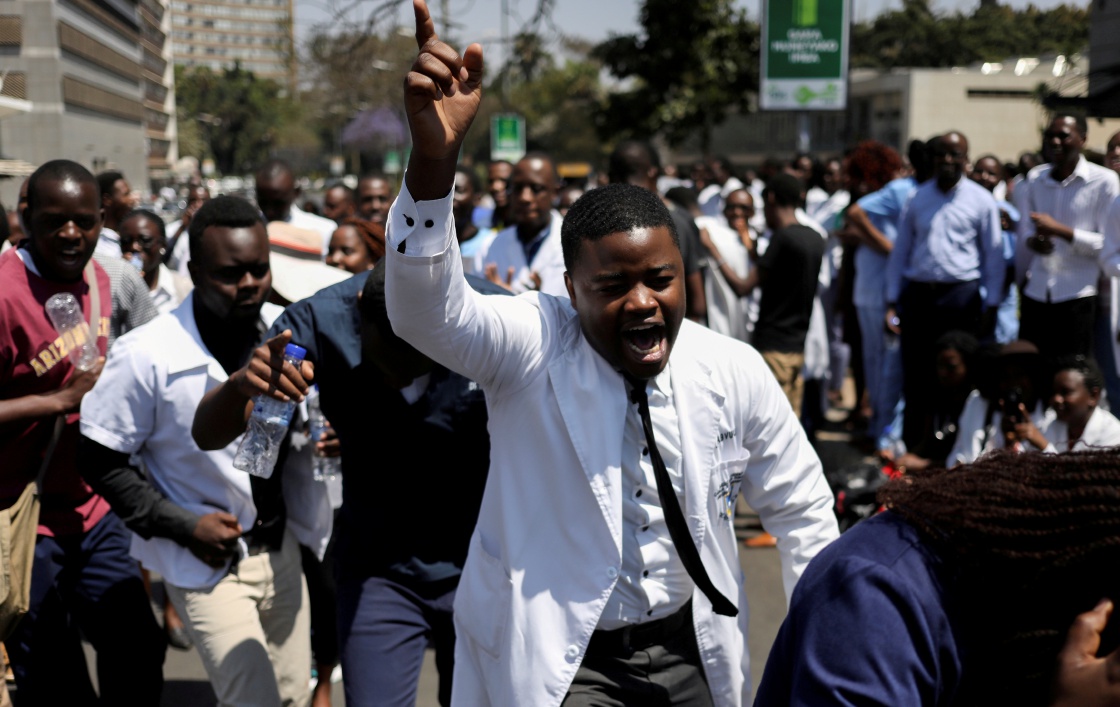 ZIMBABWE’S public hospital doctors went on strike Wednesday over what they called a lack of adequate protective gear as the coronavirus begins to spread in a country whose health system has almost collapsed.

“We will return to work only after the government has put adequate measures, including suitable clothing. Right now we are exposed and no one seems to care,” he said.

He said doctors have inadequate stocks of gloves, masks and gowns. The hundreds of doctors had returned to work in January after a four-month strike demanding better salaries and improved working conditions.

Zimbabwe has reported three cases of covid-19 and recorded its first death this week.

Neighboring South Africa’s coronavirus cases jumped again to 709, its health minister said, as the country with the most cases in Africa prepared to go into lockdown first thing Friday.

Cases across Africa are now well above 2,400. With Mali, Libya and Guinea-Bissau announcing their first, 46 of the continent’s 54 countries now have the virus. The Portuguese news agency Lusa reported the Guinea-Bissau cases, citing the presidency.

Some African leaders have scolded citizens for not adhering to prevention measures.

“Countrymen and women, I have gone ‘round the city and I have seen for myself that many among us are not taking this covid-19 seriously,” Zambian President Edgar Lungu said Wednesday in Lusaka. “I have seen multitudes patronizing bars or freely hugging and shaking hands at funerals, contrary to health advice.” The country has 12 cases.

African countries that have not recorded cases are Sierra Leone, South Sudan, Burundi, Malawi, Botswana, Comoros, Lesotho and Sao Tome and Principe, according to the Africa Centers for Disease Control and Prevention. Some have the most fragile health systems on the continent.

Congo became the latest to close its borders while reporting its third death. The sprawling nation has one of Africa’s weakest health systems and has been battling another global health emergency, a deadly Ebola virus outbreak in the east. While that outbreak now appears to be within days of being declared over, Congo also faces a large measles outbreak.

As more countries across Africa impose restrictions on gatherings and travel, many informal workers are suffering. Ethiopia’s government in a proposal to the Group of 20 major industrialized nations has said Africa needs a $150 billion emergency financing package because “covid-19 poses an existential threat to the economies of African countries.”

South Africa already has an unemployment rate of 29% and the lockdown will hit workers hard. But authorities fear what will happen if the virus sweeps through crowded low-income communities and public transport.

Teeming prisons are another worry across Africa. Ethiopia’s state broadcaster EBC cited the attorney general as saying more than 4,000 prisoners will be released to help stop the coronavirus’ spread. Those include people behind bars for minor offenses and those with children.

For most people, the new coronavirus causes mild or moderate symptoms, such as fever and cough that clear up in two to three weeks. For some, especially older adults and people with existing health problems, it can cause more severe illness, including pneumonia and death.