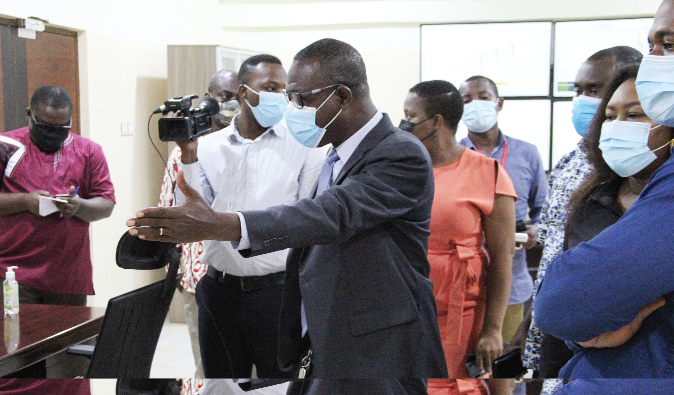 Ghana’s first digital project to monitor petroleum products lifted from depots across the country has recorded over GH¢600 million more revenue in six months than the same period the year before.

The achievement follows the implementation of the digitisation programme rolled out by the government in June last year.

The monitoring system, being implemented by a private digital assurance firm, Strategic Mobilisation Ghana Ltd (SML), recorded a GH¢744.73-million increment in the value of products lifted between June and December last year, compared to the GH¢133.23 million recorded between the same period in 2019 before the digital monitoring system was deployed.

In the first three months of this year alone, the digital monitoring system recorded GH¢333.67 million positive variance in products lifted, more than twice what was recorded in six months (June to December) 2019.

Figures made available to the Daily Graphic indicate that the difference in the volume of petrol, diesel and LPG products lifted from the various depots for June 2020 to March 2021, compared with from June 2019 to March 2020, stood at 752,460,780 litres, which amounted to GH¢1.072 billion.

Ghana’s consumption of petroleum products records marginal increases each year. However, on many occasions, the variances are understated, due to inefficient monitoring systems.

An analysis of National Petroleum Authority (NPA) and SML data on petrol, diesel and LPG after the introduction of the digital monitoring system shows a year-on-year disparity in the volumes accounted for, as against figures generated on SML’s system.

The digitisation of monitoring, therefore, means the government will realise more revenue from the downstream petroleum sector than in the past by reducing leakages in the fuel-value chain.

The General Manager of the SML, Mr Christian Sottie, told the Daily Graphic in Tema last Thursday that the encouraging performance could be attributed to effective monitoring by the introduction of the electronic monitoring system and the vigilance of officials of the Customs Division of the Ghana Revenue Authority (GRA).

Speaking after a media tour of the SML digital monitoring data centre in Tema, Mr Sottie said in June 2020 when the SML started monitoring and auditing, the volumes increased drastically, even though the COVID-19 was raging and many factories were not operating at full capacity, the borders were closed and workers were home, with some laid off.

“Our data on readings for the period June to December 2020 show that the data from the NPA were about the same as that of the SML. These attest to the fact that the SML readings are reliable and could be depended on for the revenue assurance process,” he said.

The digital measurement project to monitor revenue from downstream petroleum products from depots across the country is a partnership between the Customs Division of the GRA and the SML, a Ghanaian audit and assurance services company, aimed at digitising the measurement and reporting of petroleum product supplies from over 20 depots across the country.

The SML was engaged by the Ministry of Finance to help resolve the issue of revenue leakages in the downstream petroleum sector.

Known as the End-to-End Electronic Metering Management System (EMMS), the system enables the GRA to determine the revenue to be earned on such petroleum product supplies, with minimal human intervention.

“The system records the volume of fuel passing through the pipes via ultra-sonic waves and transmits the information to the SML data centre. We do end-to-end audit of volumes recorded here and compare it to the data from the depot,” Mr Sottie, a former Controller and Accountant-General, revealed.

He explained that the deployment of the EMMS technology, which involved the use of a non-intrusive system of affixing clamp-on metre on the pipes at the various depots, offered real-time visibility and transparency to major stakeholders, such as the GRA.

According to him, the system’s architecture and implementation were designed in such a manner that it was resistant to tampering attacks.

“When someone touches our clamp-on at any depot nationwide, we get an alert at the data centre and then we send our engineers to check immediately,” he added.

Mr Sottie explained that for the purposes of comparisons, the SML used only diesel, petrol and LPG, adding that aviation turbine kerosene (ATK), commonly known as aviation fuel, was not used due to the closure of the airports during the period under review, while kerosine and premix, which he said gave very little revenue, were excluded in the comparisons.

He expressed the conviction that with a proper monitoring system and the effective deployment of technology in other sectors of the economy, the country would be able to generate a lot of revenue to support the economy.

“As a country, we are losing a lot of revenue, but the loopholes can be identified and plugged. This is only one aspect; we do not know what is happening in the other sectors of the economy. I believe that if we put in place proper monitoring systems, the country will be able to generate a lot of revenue to support the economy,” Mr Sottie said.

While admitting that the monitoring system had been relatively successful, he said it also had some challenges.

He indicated that initially the systems faced some resistance from some stakeholders in the industry who questioned the reliability of the data, but over a period and after a series of engagements and detailed analysis of the data, the system had gained acceptability among industry players.