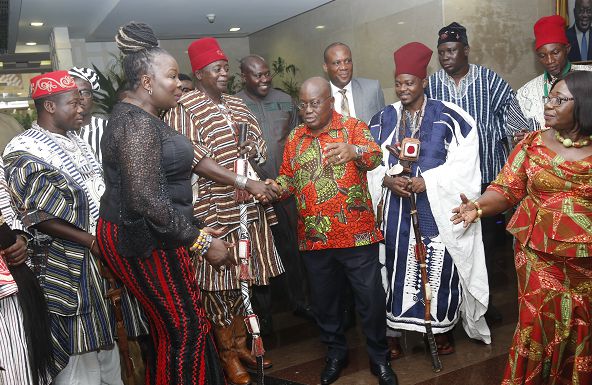 President Nana Addo Dankwa Akufo-Addo has instructed the police to fish out the persons sabotaging his government by smuggling subsidised fertiliser meant for the Planting for Food and Jobs (PFJ) programme.

He described the people involved in such acts as “greedy criminals” who do not want the progress of the country.

The President said this during a visit to the Paramount chief of Navrongo Traditional Area, Navro-Pio Pe Denis Balinia Asagibare II, as part of his tour of the Upper East Region.

About 10,000 bags of PFJ fertiliser have been impounded in Bolgatanga and Navrongo before they could be smuggled into neighbouring Burkina Faso.

Although the confiscated fertiliser has since been distributed to vulnerable farmers in all the fifteen districts in the region, the President wants the culprits brought to book.

The President further applauded the gains made since the Planting for Food and Jobs programme was implemented.

According to him, the programme began with two hundred thousand farmers but has now increased to one million in two and half years This, he said, shows the enthusiasm of farmers for the programme, which he believes can only get better.

The President, however, charged traditional leaders and the general public to be vigilant and report suspected issues of fertiliser smuggling.

“I am appealing to all of you, traditional rulers and the population, I have seen the ones that have been seized by this very active woman [Regional Minister, Tangoba Abayage] at the residency, I have seen the lorries that are there, I have seen them in the police station here in Navrongo.

“It’s not right. All of us should bind together to stop the smuggling of our fertiliser to Burkina Faso,” Nana Addo added.