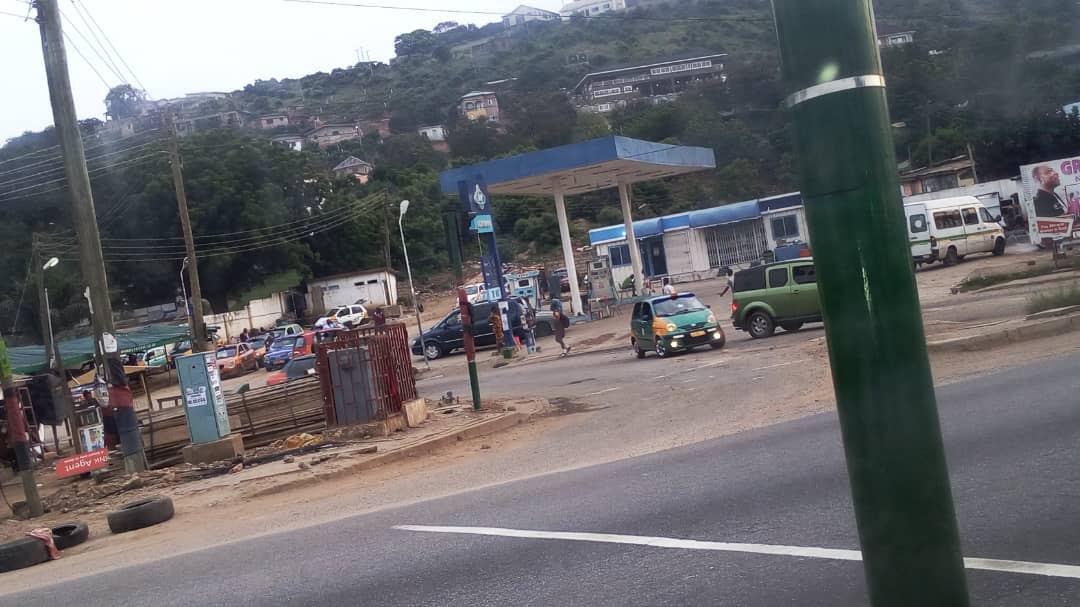 Danger is looming at Weija Junction in the Ga South Municipality of the Greater Accra Region following the invasion of the Sky Petroleum filling station by commercial transport operators using the facility as a permanent lorry station.

This is in contravention of the Fire Prevention Premises Regulations of 2003 which frowns on filling station being used as a lorry park.

On the 3rd of June, 2015, over 200 persons perished during fire outbreak at the Goil  filling station located at the Kwame Nkrumah Circle as heavy rains descended.

In the cause of the downpour, there was an explosion of highly inflammable gases leading to that catastrophe.

Information gathered by the Chronicle from the area revealed that the filling station was since 2000 operating the hand-pump type of fuel station.

However, in 2013, after meeting the requirements of the Environmental Protection Agency (EPA), Ghana National Fire Service (GNFS) and the Municipal Assembly of the area, was given the greenlight to operate a standardised fuel dispensing station

Along the line, taxi cabs started using the frontage to pick and drop their passengers.

All of a sudden, the commercial vehicle operators forced their way into the enclosed fuel dump, mounted canopies and continued running a permanent lorry park from where they plied other destinations.

Attempts by owners of the filling station to eject the intruders met strong resistance from the drivers.

When the Chronicle contacted that Ga South Metropolitan Assembly, the Chief Executive was said to have traveled and according to his Personal Assistant who mentioned his name as Eddie told the paper that information available to him suggested that the feuds has something to do with ownership of the land on which both fuel and lorry stations are sighted. He promised to contact the paper in due course for an update.

However, a highly placed source at the Municipal Command of the GNFS confirmed the existing altercation.

According to the source, the issue has lingered on as far back as the days of Mr Jerry Acquaye Thompson as the boss of the assembly and a solution was being sought when there was change of government.

The source again hinted that the position, being referred to as a time bomb again cropped up recently during a District Security Council (DISEC) meeting.

It went on that investigations are going to be launched into how come the two bodies are fighting for space in an area fenced and operating as a fuel station.

The Director of Communication at the National Disaster Management Organization (NADMO), Mr George Ayisi, on his part wants an urgent solution to whatever the problem might be between the fuel station and lorry park operators.

According to him, disaster comes at anytime and when the signs are glaring,’’ we do not need a soothsayer or scientist to alert of possible disaster’’.

His is immediate action is to save life and property.

Meanwhile as at 1750Hrs GMT, a deployment of armed police personnel was dispatched to the Sky Petroleum station at Weija Junction to avert the unforeseen.

The deployment which was led by Weija Divisional police Commander, Assistant Commissioner of Police (ACP) Bamah, had information of unusual movements by a section of the drivers at the Sky Petroleum filling station.

In was noticed these drivers have gone to pile a number of lorry tyres and blocked half of the fuel station and as to their motive, no one could tell.

Some of the drivers who reportedly went to issue threats to the owners of the fuel dump managed to escape upon realising that police were approaching.

The Divisional Commander appealed to the aggrieved parties to resort to judicial action since the police would not tolerate any act that will cause a breach of the peace.