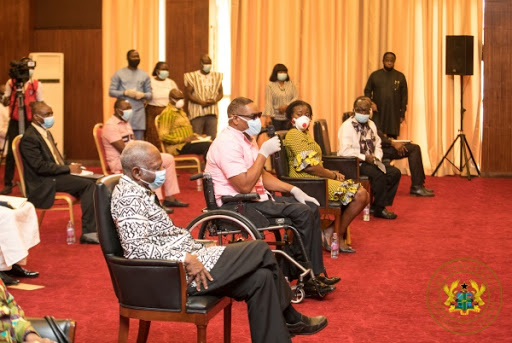 The Convention People’s Party (CPP) is urging President Nana Addo Dankwa Akufo-Addo to regularize his engagements with political parties in the country.

The call comes after the President invited the various political parties to a meeting at the Jubilee House to brainstorm and share ideas on how to better confront the COVID-19 Pandemic, which has already to a partial lockdown in part of the country, last week.

CPP General Secretary, James Kwabena Bomfeh, popularly known as Kabila, in a statement, sharing the Party’s observations on the presidential engagement with the political parties and sighted by BestNewsGH.com, averred that the move will engender politics of consultations and consensuses, rather than the politics of confrontation, bickering, insults, defamation, fighting, maiming and persecution among others.

Read the CPP’s detailed observation below:

SOME OBSERVATIONS FROM THE CONVENTION PEOPLE’S PARTY, CPP AT A MEETING ON COVID-19 AT THE INSTANCE OF THE PRESIDENT OF THE REPUBLIC OF GHANA, APRIL 3, 2020.

Better still if this could become a regular platform for all political groupings towards politics of CONSULTATIONS and CONSENSUSES than confrontation, bickering, insults, defaming, fighting, maiming, persecutions and death etc.

Information and Communication management among the populace as well as self-discipline in the wake of crisis are key ingredients to war fare and Ghanaians must embrace that reality. Accuracy, validity, verifiability and authenticity of what is put out must be jealously guarded.

We applaud the authorization from the Minister of Health to use already existing drugs: hydroxychloroquine and Azithromycin plus Vitamin C for treatment though not approved, but have demonstrated to be effective in many patients in France, USA and Italy.

There is a serious warning in the skewed kwashiorkor-like nation building efforts we have made. We can learn better from the growth-pole theory of Francois Perroux which appear to undergird the audacious 1D1F programme. We need to pay particular attention.

Could the nation also consider some bailout or hand-out for the masses of our suffering people who fall below the basic poverty line? These hard times are going to be hardest for the vulnerable and marginalized among us. Can government do something about them?

We must also get more ventilators because the Experts have said that we do not have the minimum requirement. The major cause of the deaths in countries like Italy and USA were as a result of the lack of ventilators to support breathing in most of the affected old patients.

More reagents need to be procured for testing. We can expand the centres of testing beyond Noguchi in Accra and KRCC in Kumasi.

While asking the civilian population to be law-abiding and observe strict adherence to the directives given by the President in the lockdown of parts of Ghana, we admonish the joint Police/Military task force to give a human face to enforcement. No one should dare the capacity of the men and women in uniform in these trying times. And as much as possible, they should also comport themselves with the highest level of restraint. No abuses/excesses.

May God bless our homeland Ghana and make our, rather self-undermining nation, great and strong. May we learn to eschew petty partisan divisions which have been the bane of our progress right from the foundations. That assured, there is Victory for US!