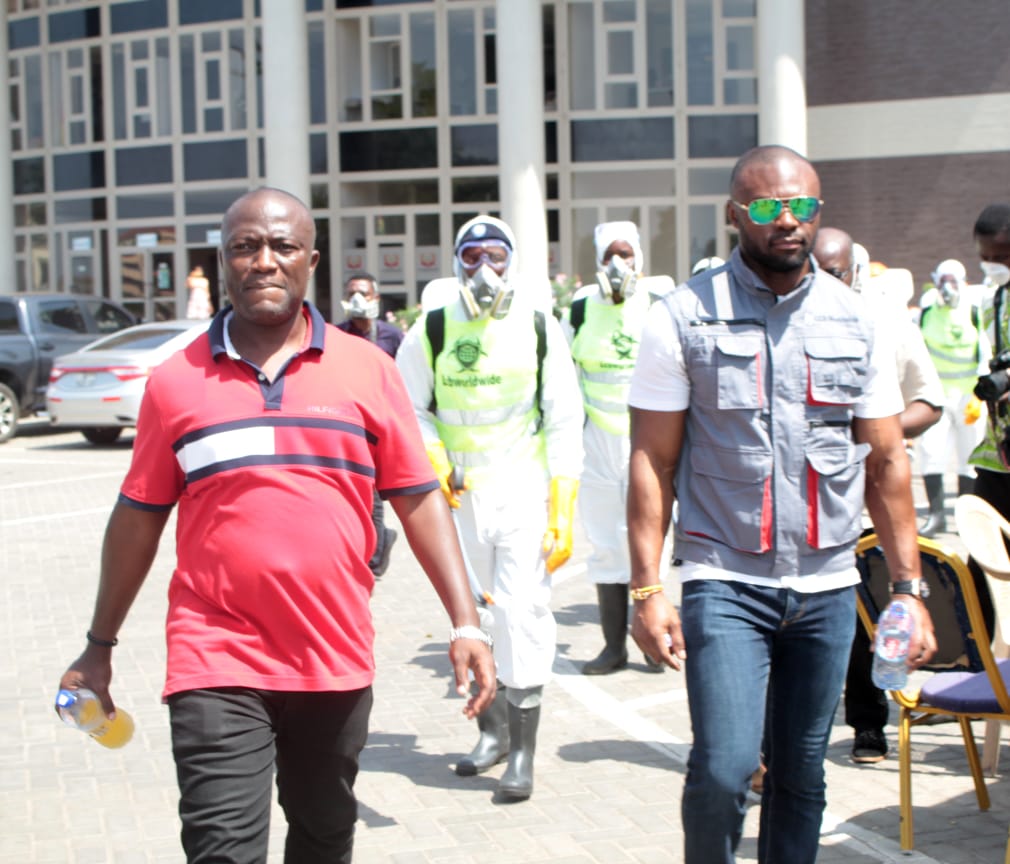 Crisis Management Company, LCB Worldwide Ghana Limited has joined the fight against the deadly COVID-19 virus in the country.

The Company on Saturday, March 28, 2020 began the disinfection of Ministries, Departments and Agencies (MDAs) in Accra as part of effort aimed at helping to coil the spread of the virus.

The company began the disinfection exercise at the premises of the Accra Metropolitan Assembly, disinfecting all the offices one after the other, before moving to the various Ministries, Departments and Agencies, within the Ministries enclave.

Even before the outbreak of COVID-19, LCB Worldwide Ghana Limited has been at the forefront of disinfecting various schools and market centres across the country.

Chief Executive Officer of LCB Worldwide Ghana, Mr. Kareem Abu speaking to the media during the exercise posited that the gesture was part of the Company’s Corporate Social Responsibility (CSR) to the country. 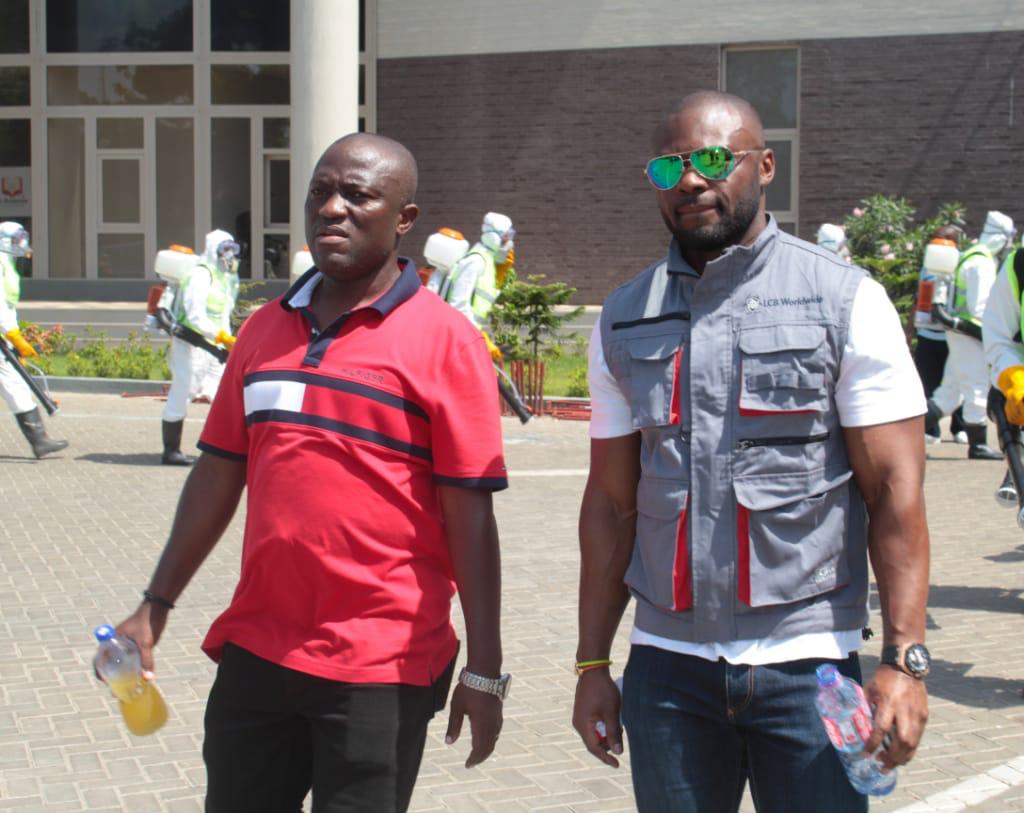 CEO of LCB Worldwide Ghana Limited, Mr. Kareem Abu on the right with the Mayor of Accra, Mohammed Adjei Sowah during the disinfection exercise

According to him, the scourge of the virus which has been declared by the World Health Organization (WHO) as a pandemic, requires that pragmatic solutions be proffered to aid the nation contain the situation.

‘’These are critical times in the life of our beloved country and we at LCB believe we must all put our hands to wheel and support government initiatives to bring relief to the people. We recognize efforts and measures being deployed by government and we are here to show solidarity with the generality of the Ghanaian people in these difficult moments.’’ Mr. Kareem Abu averred.

He said the company has lined up an itinerary that will see it embark on the disinfection exercise at various strategic locations and installations across the country as its contribution to the fight against the pandemic which has seen some 136 persons testing positive for the virus.

‘’I must add that we took a cue also, from the President’s call for private Businesses to support in the fight against this deadly pandemic and that is why we have come all out to lend our widow’s might in this regard.’’ He noted further.

He opined that these are not ordinary times on the global stage as far as issues relating to health are concerned, citing the British Prime Minister Boris Johnson, the Canadian Prime Minister Justin Trudeau and his wife, Prince Charles of the UK and other high profile personalities across the globe who have tested positive for the COVID-19 virus, explaining that it was imperative to adopt stringent measures to save humanity.

Mr. Kareem Abu explained that the company is reputed for using only organic chemicals for all of its disinfections, adding that no one will be required to vacate a particular vicinity or premises before they carry out the exercise.

He said ‘’The good thing about our chemicals is that we use only organic chemicals and so we don’t need to send people away before disinfecting the various places. So even as we go about this exercise, people who are busy around can go about their businesses without let or hindrance because they don’t need to worry about the chemicals we are using.’’

The Mayor of Accra, Mohammed Adjei Sowah who was with the LCB team all through the exercise on his part lauded LCB Worldwide Ghana Limited and Mr. Kareem Abu for including the Accra Metropolitan Assembly in the exercise.

He averred that the gesture comes in handy as government rallies around the private sector to help both in kind and in cash to quell the spread of the virus.

He called on the generality of the Ghanaian people to compliment government’s efforts by adhering strictly to the rules of engagement as announced by the president and to take precautionary measures to protect themselves and their families.

He described the initiative as a laudable one that must be emulated by all public spirited individuals and organizations in these critical times.

Indeed, this is not the first time the company is embarking on its Corporate Social Responsibility to the Ghanaian people.

Late last year, LCB Worldwide Ghana Limited embarked on disinfection exercises as part of its CSR in selected Senior High Schools and Markets in the Greater Accra and Eastern Regions.

The Ghana Union of Traders Association (GUTA) is on record to have lauded the company for embarking on the disinfection of market centres across the country, and Abbossey Okai which is predominantly occupied by used spare part dealers.

LCB Worldwide Ghana Limited is the Ghanaian Company that has been contracted by Government through the Ministry of Health and the Ghana Health Service to disinfect import and export cargo at the ports in the country.

This is to ensure that all imports and exports are disinfected of all contamination and rid of any form of infectious diseases.

Industry players have observed that, but for the existence of the company at the ports and points of entry, the magnitude of the COVID-19 virus in the country would have been huge and catastrophic. 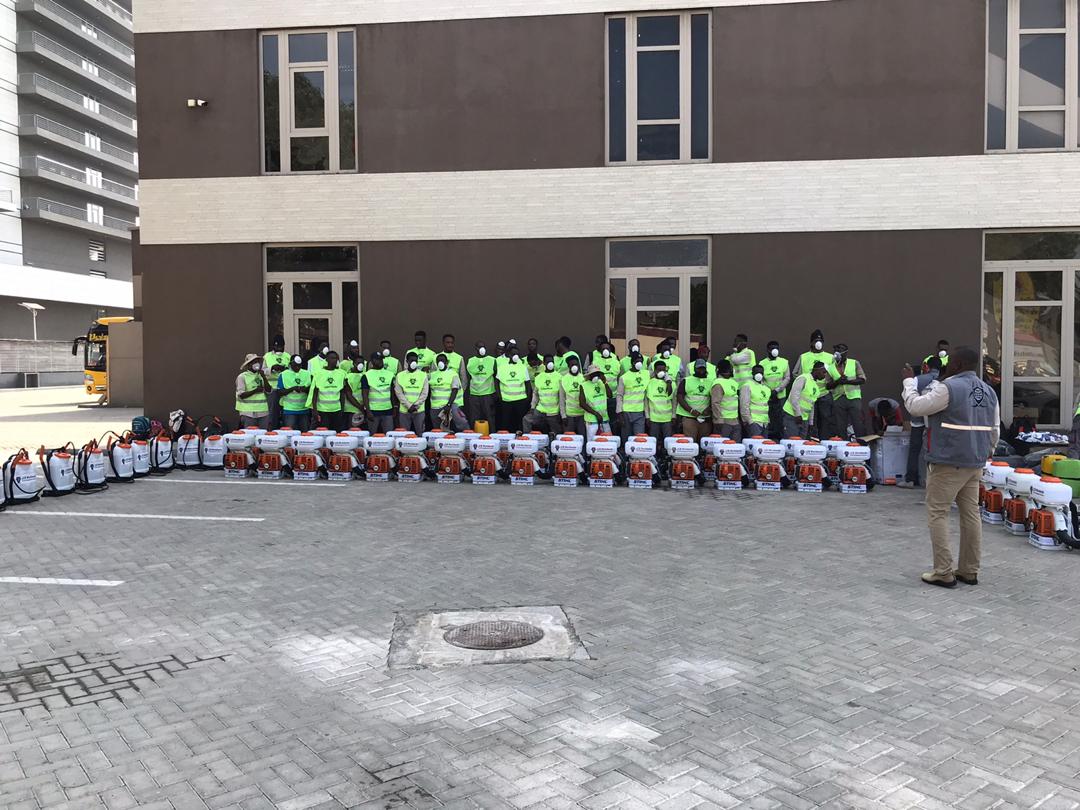 Where is the support system for businesses? -PEF Chief Executive quizzes as COVID-19 takes a toll on private sector