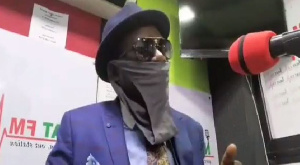 Rev. Cyril George Carstensen Lutterodt has scaled up his controversial tag by appearing on a radio program with his wife’s underwear as a nose mask.

Widely known as Counselor Lutterodt, the public figure who was on Accra-based Neat FM to discuss a topic about mothers as the world commemorates Mothers’ Day on Sunday was clad in suit with a hat to match as usual.

A video he shared on his Facebook wall which captured the moment had him dip his hand into his pocket to pull out an underwear belonging to his wife to use as nose mask.

“I have my nose mask, I don’t want to have any issue with anybody when I’m in town,” he said as he fixed the underwear.

“But this is not a nose mask. Is that not a lady’s underwear?” asked host of the show to which Lutterodt retorted “You’re primitive. You’re not serious.”

“It’s Mothers’ Day; official nose mask. I hate to be arrested for not wearing a mask. Look at the size. Your wife’s size is what you’re supposed to use. This is my wife’s pant; don’t use a new pant. Use one she’s worn before. This is sign of showing motherhood on behalf of your children to your wife.”

Lutterodt who works with the Korle Bu Teaching Hospital as a radiologist mentioned that President Akufo-Addo’s directive to the general public that all should wear nose masks to avoid contracting coronavirus must be adhered to and he has chosen to heed and celebrate his wife concurrently.

He has asked men to celebrate their baby mamas instead of women who have not given birth.

“Mothers are those who have given birth. If you’ve not given birth, you’re not a mother. You are a foster parent,” he said.

“We have a day to celebrate foster parents and must be observed as such. It is also not a wife day celebration unless your wife has begotten a child. A caretaker is not a mother. If you’re doing something for your wife on Mothers’ Day, you’re doing so on behalf of your children.”