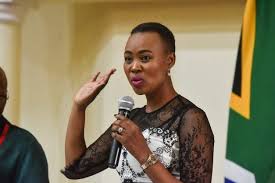 South Africa’s communications minister has been suspended for two months – one of which will be without pay – for having lunch with a friend during the coronavirus lockdown.

Stella Ndabeni-Abrahams has been the talk of the town since a photograph of her eating with Mduduzi Manana surfaced this week.

The image, which shows the two enjoying a meal at a table with four of Mr Manana’s family members, was posted on one of his social media accounts and has been re-posted by others many times: South Africans have been called on to stay at home during the lockdown – now in its second week – and only go out and about for essential trips, such as work, to buy food or to seek medical care.

President Cyril Ramaphosa, who has talked to the minister about the picture, said in a statement on Wednesday that he was “unmoved” by the reasons she gave for being there”.

“None of us – not least a member of the National Executive – should undermine our national effort to save lives in this very serious situation,” he said.

The president added that “no-one is above the law”.

Minister Ndabeni-Abrahams has apologised saying she was “deeply sorry” for her actions.

“I hope the president and South Africans will find it in their hearts to forgive me,” she added.

He said that she went to his house in order to collect face masks that he was donating through his foundation to help in the fight against Covid-19.

South Africa’s government has largely been praised for its efforts in containing the spread of the virus, even by opposition parties.

Mr Ramaphosa needed to act quickly – but it is not clear if the censure will be enough to appease those who were calling for Ms Ndabeni–Abrahams to be sacked over the incident.