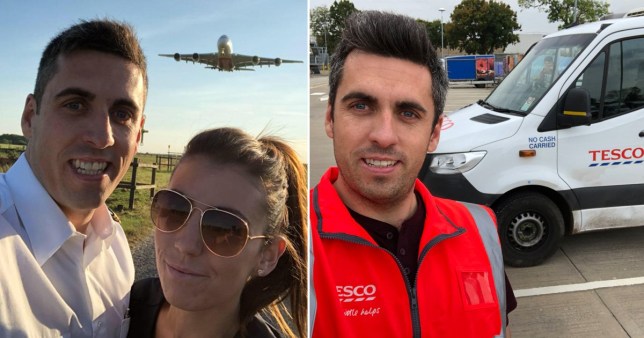 A British Airways pilot out of work due to the coronavirus pandemic has got a new job as a Tesco delivery driver.

Peter Login, who is used to flying passengers around the world in a 747, has been saluted for his temporary change of career as a key worker dropping groceries off to customers in lockdown during the crisis.

He tweeted to say his BA keys had been ‘hung up for a while’, but he is ‘back in the cockpit’ with the supermarket, adding a joke on the airline’s motto ‘To Fly To Serve’ with the hashtag ‘#ToDriveToServe’.

British Airways has grounded all flights at Gatwick, they are reduced at Heathrow and 30,000 cabin crew and ground staff have been laid off. Over 4,000 pilots were also told they face a 50 per cent pay cut.

It’s the second time in just months that Peter has found himself out of work.

He used to work for Thomas Cook for three years before the airline went bust last September. The former DHL cargo pilot then went on to BA where he has worked for four months before the coronavirus pandemic stopped flights across the world.

Friends were quick to praise him for joining the frontline as a delivery driver. Brad Tate said: ‘Shows a lot of character, Peter. I hope you’re back on the flight deck soon.’ Stu Whiteman said: ‘What an absolute superstar you are.

That dogged spirit & can-do, will-do attitude will get us through this, yours is such a great example. ‘For everyone else, it’s simple; either help the nation by doing the Key Work required, or stay at Home. Nothing else, just one of those two!’ Another joked: ‘I’d totally be wearing the hat though for it.’ Peter replied: ‘I’ve thought about it.’