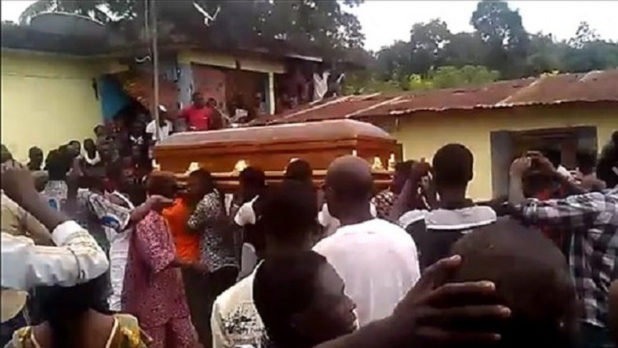 People of Kaoma district in neighboring Zambia have been in the greatest shock. A coffin with a corpse was reported to have refused to be buried.

Correspondent of media reports, the deceased was a 47-year-old female. She was single.

Reports say the drama started when the bearers of the corpse arrived at a local New Apostolic Church for service in the morning. The coffin with the corpse is said to have refused entry into the church auditorium.

Upon being removed from the canter, it led its bearers to a house and plunged it through the window breaking glass panes and lodged inside the house.

The action attracted a huge mob that wanted to witness the shocking incident. Police was called to the scene and used teargas to disperse the irate mob.

Kaoma District Commissioner, Kennedy Liale Mubanga said it took the reinforcement of soldiers who were led by the Battalion Commander. Officers from the army barracks went to retrieve the corpse.

A forced burial was ordered by DC in the afternoon. This is not the first time for shocking news like this to have happened in Zambia.

A similar thing happened in May 2017 in a Zambian village, a corpse refused to be buried. It led villagers to the house of its killer until allowing burial.

Media cited the video online by an official with the Zambia Ministry of Foreign Affairs, Hagra Tembo.
He wrote, “A body refused to be buried until it took villagers to a house where the person behind the death of the deceased resides.”