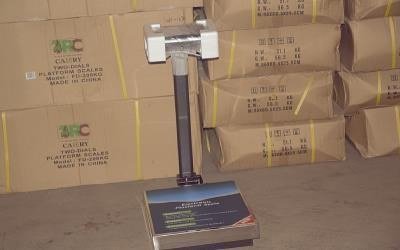 The Chief Executive Officer of Cocoa Board (COCOBOD), Joseph Boahen Aidoo says the Board will soon distribute electronic scales that will be used to weigh cocoa in farming communities across the country.

He said this at Pramkese in the Kwaebibirem Municipality of the Eastern Region as part of his working visit to the region.

Mr. Aidoo noted that the electronic scales will control corruption by halting the practice of manipulation of the old scales by unscrupulous people.

He said about one hundred thousand land clearing machines are also being imported to be distributed through cocoa cooperative unions to farmers, to aid in weeding.

Tricycles will also be provided for cocoa farmers to help them cart farm produce to their destinations.

Mr. Aidoo said with effect from next month, the government will announce an upward price adjustment of bags of cocoa that are purchased from farmers.

He advised cocoa farmers to secure cocoa seedlings from the appropriate authorities, prune their cocoa trees regularly and plant other trees on their farms to produce shade for the cocoa to ensure quality of their produce.

He encouraged the youth and other professionals to see the advantages of cocoa farming and venture into it.

The Municipal Chief Executive of the Kwaebibirem Municipal Assembly, Seth Antwi Boasiako commended government for measures put in place to enhance the lives of farmers.

He said, cocoa is the backbone of the country’s economy and appealed to government to repair roads in cocoa farming communities for easy accessibility.

The team also visited farming communities in Kokobeng in the Buadua District and Asuoso in the West Akyem District, both in the Eastern Region where cocoa farmers were assured of better opportunities ahead.