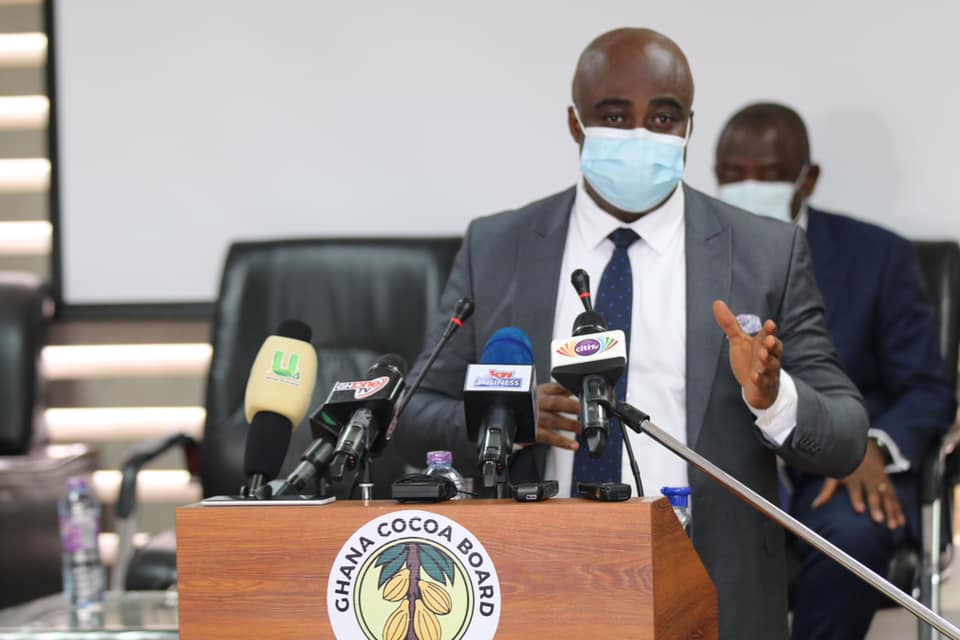 Dr Emmanuel Opoku, the Deputy Chief Executive of COCOBOD in charge of Operations said this at a press conference held yesterday, August 5, 2020 at the Cocoa House in Accra to update the public on measures been taken to deal with the tampering of cocoa weighing scales.

This follows the recent airing of a 2018 documentary film on scale tampering within the cocoa sector by the Multimedia Group on their Joy News channel.

Management, Dr Opoku said, “takes this issue of weighing scale tampering very seriously and has on several occasions condemned the practice and similar acts”. As such, COCOBOD wants to end the “condemnable act” and its “regressive impact on interventions that COCOBOD has put in place to improve the earnings and livelihoods of cocoa farmers.”

He said, following a preliminary inspection tour of LBC sheds, led by the Chief Executive in 2018, the management of COCOBOD commissioned the Ghana Standards Authority (GSA) to perform a thorough inspection of all weighing scales used at LBCs to gather empirical evidence on the extent of the problem of scale adjustments.

Based on the report from GSA, which found that the practice was systemic, management settled on two solutions: a preventive reform measure and a punitive measure.

Under the preventive measure, COCOBOD will import the GSA recommended electronic sealable weighing scales which meet a set of tamper-proof standards to give at a cost to the LBCs. This is to ensure that the measure is rolled out quickly and that there is a common standard for all. LBCs will be required to use the new scales only.

Dr Emmanuel Opoku said, in the meantime while the procurement process for the new weighing scales is ongoing, the punitive measure will be applied in the upcoming cocoa season. LBCs will be surcharged with the monetary equivalent of the aggregated weight from cocoa sheds across the country that the LBC in question may have short-changed the unsuspecting farmers, once GSA confirms adjustment of such weighing scales.

The amount which the LBCs have been surcharged with will then be paid to the farmers who sold their cocoa at those sheds.

Even though the documentary by the Multimedia Group is belated, given that it was produced in 2018, and does not capture the steps which COCOBOD has taken since 2018 to tackle the problem, Dr Opoku, nonetheless, commended the media house and its journalist for making a documentary on the problem.

He added that “the work of the media in shining light on the situation and improvement as we progress, as well as the vigilance of our field staff and the cocoa farmers themselves, will together play a crucial role in eliminating this cocoa canker.”

He expressed confidence that COCOBOD’s Farmer Data/Cocoa Information Management System, which is underway, when ready will improve overall monitoring of the supply chain, so that, issues which come up can be promptly addressed.

He called on all stakeholders to join forces with COCOBOD to safeguard the immediate and future welfare of cocoa farmers and create a fair and rewarding environment for all to operate.