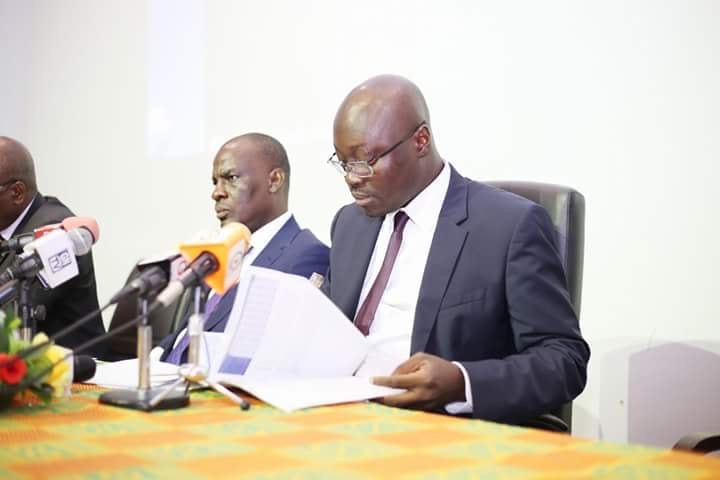 The Minority in Parliament has chided government for its poor handling of the Cocoa Sector and described figures released by the Minister for Agriculture and the Ghana Cocobod as the proce of the commodity on the world market as false.

The Minority which held a press conference today with a focus on the producer price of Cocoa for the 2018/2019 crop year, also dwelt on what they say is the high cost goods in the while cocoa farmers continue to remain static.

‘’The price of everything in this economy has gone up, meanwhile the income of the hard working cocoa farmer has remained static nominally, and decreasing in real terms. So, while the cost of living is rising, the real incomes of farmers are dwindling’’.

They argued further that the real producer price (after accounting for inflation) declined by 16% in 2017 and further down by 8% in 2018, adding that cumulatively, the real price paid to cocoa farmers diminished by 24% from 2016 to date.

‘’Therefore, by the insensitive decision to maintain cocoa prices in these hard times, the cocoa farmer is far worse off today, than he was in 2016.  In fact from 2009 to 2016, there was no year that the cocoa farmer did not experience an increase in the real price of cocoa’’ the added

Below is the full statement of the Minority on the cocoa sector.

MINORITY PRESS CONFERENCE ON PRODUCER PRICE OF COCOA FOR

Friends of the media

We wish to welcome all of you sincerely to this important engagement between the minority in parliament and our dear cocoa farmers to discuss matters of extreme concern, relating to the management of the cocoa sector by the NPP government.

Last Monday, the government announced that it had maintained the producer price for cocoa contrary to our expectations and that of the Ghanaian cocoa farmer.

The minority in parliament have found it necessary to make this intervention because we sincerely believe that the Akuffo Addo government is displaying gross insensitivity towards our cocoa farmers by adopting the current producer price determination formula. This formula will impoverish cocoa farmers who toil and labor under very deprived conditions to sustain our economy. We wish to indicate that the reasons assigned for the maintenance of the producer price at Gh¢475 per bag of cocoa is highly unacceptable our reasons for this position are the following:-

The use of an unrealistic exchange rate

The syndicated loan contracted for the purchase of cocoa for the 2018/19 crop season is $1.3 billion. In the formula for the utilization of this amount, the NPP government used a dollar/cedi ($/¢) exchange rate of 4.54, which is lower than the Bank of Ghana official rate of 4.8. The use of the lower exchange rate resulted in a lower total FOB amount in terms of value, hence a lower producer price. Using the official Bank of Ghana rate of 4.8 would have increased the FOB amount in terms of total value by GH¢ 514,800,000. This increase in value would have pushed up the producer price of cocoa by GH¢ 35.75 given the projected output of 900,000MT. All other things being equal, using a realistic exchange rate alone could have increased the producer price of cocoa to GH¢510.75 from the announced GH¢475. We are therefore urging the NPP government to explain why they opted for lower rate after a failed attempt to arrest the cedi. This deliberate decision to quote the FOB price at a lower exchange rate will subject the poor farmer to penury and will result in a great financial loss to the Farmer.  It also smacks off an attempt to short change farmers and cream off monies due them.

We demand the use of the appropriate exchange rate to put smiles on the faces of our suffocating cocoa farmers.

Ghana, our beloved country is the leading producer of quality cocoa in the world. Quality cocoa reduces cost of processing, offers the required flavor, and provides standard butter content. It is against this background that our cocoa attracts the highest premium in the World market.

Ladies and Gentlemen, it would be of interest to you to note that Ghana received a premium of $350 dollars per ton of cocoa sold in the international market for the crop year 2017/2018. This premium alone raked in $287,000,000, an equivalent of GH¢ 1,262,800,000. It must be stated that the investment in quality cocoa is made by the farmer who ensures proper fermentation and thoroughly dries the beans under the scorching sun. Fairness and equity demands that the premium be given to the farmers. Unfortunately, the Akufo-Addo government has deemed it fit to unjustly keep the proceeds of the premium and has failed to account for its usage. We have one simple question; where is the GH¢1,262,800,000 premium money for 2017/18? If this money had been added to the producer price of GH¢475 for the 2017/2018 crop season, the farmer would have gotten a price of GH¢563.68. Hence, the premium could have pushed it up by GH¢88.68. President Akufo-Addo, our poor cocoa farmers need their money!

Table 1: Baseline calculations of the amount due farmers

Ladies and Gentlemen, the producer price of cocoa per bag using the

NDC’s formula and the principle of ‘farmers first’ would have been GH¢682.61 as at today.

The statement made by the CEO of the Ghana Cocoa Board, that the World Market price has declined by 40% is totally false and cannot be accepted. We are well informed that the current FOB price of cocoa per ton in the World market is quoted at $2,200. This represents a significant increase of 6 percent from the previous price of $2080 per ton. We are therefore urging the Akufo-Addo government to come clean and admit that it misled cocoa farmers and Ghanaians and take immediate steps to review the decision to maintain the producer price of cocoa because the justification is flawed.

At a time that government has cited a misleading justification, that the world market price of cocoa is falling, to maintain the producer price, we have noted very sharp and unexplained increases in administrative costs incurred by COCOBOD.

The claim that the producer price of cocoa cannot be increased due to the falling World market price while increasing the administrative expenses is absolutely unacceptable as it shows a clear pattern of misplaced priorities and wasteful expenditure. Where is the wisdom in failing to improve the welfare of the farmer whose labor brings value to the entire COCOBOD but rather increasing the administrative expenditure? A study of Table 2 below shows that the Government made a decision to increase the administrative cost while maintaining the producer price.

It is gradually killing the interest of Ghanaians in cocoa farming.

Ladies and Gentlemen, even as we hear the lamentations by cocobod over lack of funds as a result of declining world

market prices, the same cocobod has been able to raise over 1million Gh Cedis for the renovation of the residence of the minister for Food and Agriculture. Is the minister’s comfort a priority over the welfare of our Farmers?

Is it not strange that the Board of cocoa marketing company could fund the Board’s globetrotting to most of the countries that patronize Ghana’s Cocoa?

The price of everything in this economy has gone up, meanwhile the income of the hard working cocoa farmer has remained static nominally, and decreasing in real terms. So, while the cost of living is rising, the real incomes of farmers are dwindling. The real producer price (after accounting for inflation) declined by 16% in 2017 and further down by 8% in 2018. So cumulatively, the real price paid to cocoa farmers diminished by 24% from 2016 to date. Therefore, by the insensitive decision to maintain cocoa prices in these hard times, the cocoa farmer is far worse off today, than he was in 2016.  In fact from 2009 to 2016, there was no year that the cocoa farmer did not experience an increase in the real price of cocoa.

The minority in parliament and the National Democratic congress (NDC) would like to assure our gallant cocoa farmers that we will not leave them alone in the struggle against cheating under President Akufo-Addo.