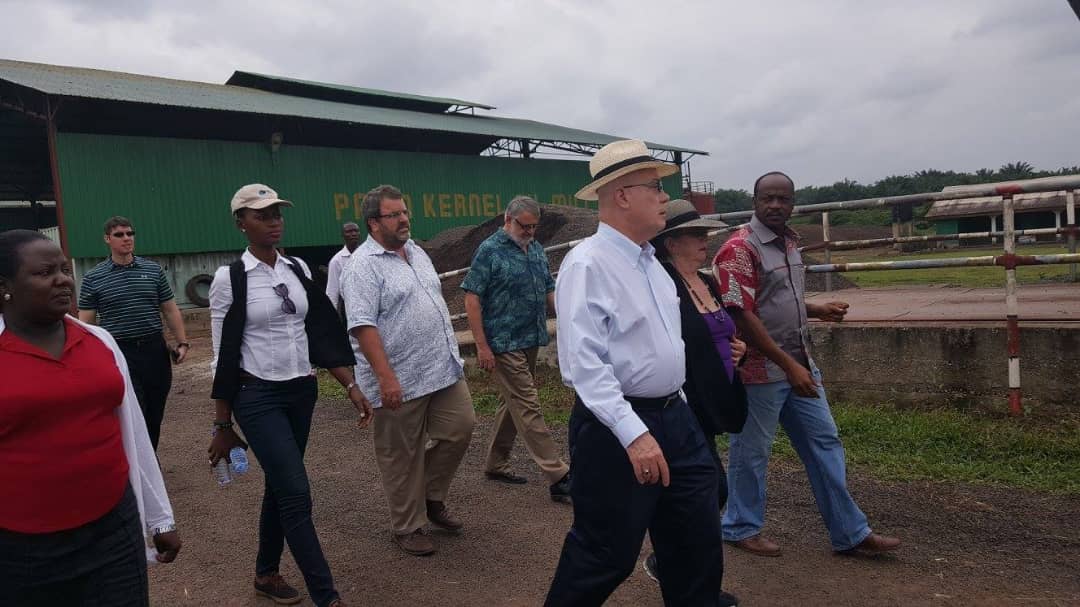 The Climate Change Conference that was recently organised by the United Nations in Glasgow, Scotland, is a reminder to world leaders and indeed everyone that unless a concerted, systematic, global action is adopted to stop negative human activities that destroy our planet, human survival could be at risk.

Rising desert conditions and extreme heat waves, greenhouse emissions, dying water bodies, landslides and recurrent flooding that is pummeling various parts of the world at such a ferocious rate is a timely signal to humanity to refurbish the planet today, not tomorrow, or face extinction.

But whereas many individuals and organizations are only recently waking up to the looming climate change crisis confronting mankind, an indigenous Ghanaian agribusiness company has actively pursued and modeled its business operations on climate change adaptation, agro forestry and biodiversity for over 17 years with incredible results.

B-BOVID, an acronym for Building Business on Values, Integrity and Dignity is a social enterprise founded by Issa Ouedraogo, in Takoradi in 2004.

As a professional who worked in the United Nations system for several years, Mr. Ouedraogo’s life centered around traveling from one conference to the other attending workshops on Poverty Reduction, Food Security, Climate Change, Millennium Development Goals, Sustainable Agriculture, Wealth and Job Creation among others.

However, according to Mr. Ouedraogo, these workshops proposed beautiful concepts and theories that failed to directly impact the poor rural farmer in any sustainable way.

“I enjoyed my work in development cooperation and was happy with the six figure salary I earned. Nonetheless, I had no real satisfaction with the outcomes of most these conferences because the concept of sustainability and poverty reduction which was propounded by the experts posed several implementation headaches for the poor farmers particularly in Africa and Asia. There was a huge gap between the theories on the one hand, and the reality of implementation on the other hand. B-BOVID was my own strategic initiative to provide direct benefit to poor rural farmers by bridging the gap between the theory and practice of sustainable agriculture,” he said.

B-BOVID was founded in 2004 at Angu and Pretsia Nkwanta, a suburb of Sekondi-Takoradi in the Shama Ahanta District of the Western Region. Mr. Ouedraogo has consequently become a household name associated with the modernization of agriculture in Ghana by virtue of his unique social enterprise project, the first of its kind in Ghana.

As a socially inclusive initiative, B-BOVID maintains over 2000 small holder farmers in its value chain who feed the company’s palm oil processing mills with over 20,000 tonnes of palm fruits annually.

These farmers are beneficiaries of the company’s mechanization and training facilities and receive very generous and competitive prices for their produce.

B-BOVID currently controls a little over 3% of total palm oil production in Ghana, supplying palm oil and Palm Kernel to clients in Ghana, Togo, Nigeria and other countries within the sub-region.

Key components of this socially inclusive, community-led agricultural model include a Mechanization Center set up in collaboration with the Ministry of Food and Agriculture to support smallholder farmers with modern agricultural machines at subsidized rates and to offer advisory services on best mechanization practices for soil and water conservation to enhance soil fertility and reduce erosion for improved crop yields.

The company’s Agroforestry Center offers free practical demonstration techniques on mitigating climate change while instructing farmers on the principles and benefits of afforestation.

B-BOVID’s eco-garden (The Garden of Eden) has become a tourism rendezvous for students, researchers and lovers of nature as a sterling example of eco-biodiversity and afforestation.

As part of the strategy to promote the concept of social entrepreneurship among its network of over 2,000 small holder farmers, B-BOVID has set up an Alternative Livelihood Center that provides opportunities in fish farming, animal husbandry, beekeeping and organic farming to create hundreds of jobs, ensure additional incomes for farmers and address the problem of malnutrition among community members.

The Center also supports the farmers with seedlings, new varieties of seeds, and a shopping center where farm implements are subsidized for its farmers.

In addition to gathering relevant information on the weather, commodity pricing, climate change and other issues, the ICT Center has been mainly responsible for helping to improve information sharing among farmers from other parts of the country as well as creating market linkages to enhance integration with farmers in other parts of the world.

As a way of demonstrating and solidarizing with the concept of a true value chain that continually supports and improves the welfare of its nuclear farmers, B-BOVID has established a modern palm oil processing facility that buys palm fruits from its farmers to produce crude palm and palm kennel oil, shells, cake, fibre and animal feed.

B-BOVID has amply demonstrated that agriculture, and indeed, innovative agri-business for that matter is rewarding not only in creating jobs and improving the socio-economic circumstances of individuals, particularly unemployed youth, but that agriculture is indeed the bedrock of Ghana’s political stability and economic development.

In collaboration with reputable organizations such as the IFDC, USAID, German Climate Fund though the German Embassy, the Australian Embassy, the Ministry of Food and Agriculture (MOFA), GIZ/CIM, TULLOW, GREL, AgDevCo/SDU, SOLIDARIDAD, the National Youth Authority, the Association of Western Region NGO’s, the Ghana National Chamber of Commerce and Industry, (GNCCI), universities and research institutions among others, B-BOVID has developed various strategic programs to train and equip farmers on a variety of development and farm management issues. As a result, hundreds of youth have been encouraged to take up farming as their means of livelihood.

Combating the effects of climate change through afforestation, eco-biodiversity and environmental conservation ranks among B-BOVID’s highest achievements. The company has sustained a green campaign among its farmers for 17 years. Its focus on soil conservation, the prevention of all forms of pollution, soil degradation and the emission of greenhouse gases through the recycling of liquid waste (palm oil mill effluent) has become a reference point on climate change adaptability in the area.

It is not surprising therefore that the Founder, Chief Executive Officer and Chairman of B-BOVID’s Board of Directors, Issa Ouedraogo has received several high profile national and international awards in recognition of the sterling role he has played in his efficient management of the affairs of the company.

In 2016, Issa had the honor of being presented with the Overall Businessman of the Year Award by the President of the Republic of Ghana, Nana Akufo Addo at a ceremony organized by the Ghana National Chamber of Commerce and Industry (GNCCI) in Accra. In the same year, B-BOVID won the Innovative agro-business and the Western Regional Business Excellence award in the Gold category. In 2013 and again in 2017, he was adjudged the Overall Western Region Best Oil Palm Farmer after having previously won the same award in the Mpohor District in 2007.

In 2012, the United Nations awarded Issa its coveted Global Impact award for his pioneering role in social investment along with nine other progressive companies from around the world. He also received a special award from the Wuppertal Institute for Climate, Environment and Energy from Germany for successfully implementing such an ambitious project in Ghana. B-BOVID is one of few Ghanaian companies to be recognized by the reputable London Stock Exchange as driving innovation and inspiring Africa in its 2019 report. The company’s business model attracted Moringa Africa into an investment partnership in 2018 to upgrade its production capacity and support its manpower development effort.

Issa Ouedraogo is a dye-in the wool social entrepreneur. He is the founder, Chief Executive Officer (CEO) and Board Chairman of B-BOVID and TRACTOR.
He spent the early part of his professional life in development cooperation, supporting the use and application of Information Communication Technology (ICT) in public institutions and Non-Governmental Organizations.

He was subsequently engaged by Ghana’s National Development Planning Commission (NDPC) sponsored by CIM/GIZ as IT Director from 2004-2010.

Issa Ouedraogo is a member of several governing boards and an effective Conference Speaker, having made several insightful presentations at national and international conferences.

Mr. Ouedraogo holds a first degree in Business Informatics from IHK Düsseldorf, Germany and a Masters in Management Information Technology (MIT) from Sunderland University in the UK.

He is also a certified Network Engineer from both Microsoft and Novell.