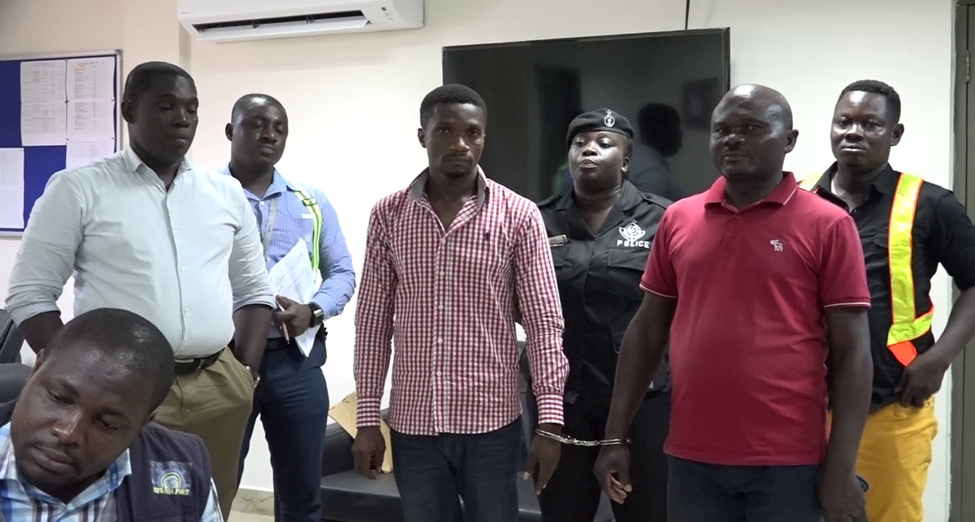 Two persons have been arrested for allegedly falsifying GPHA revenue documents in Tema.

The two, Paul Amesu Regatta, a clearing agent and David Kamassah a café operator were nabbed when they allegedly fraudulently inflated GPHA port charges of GH¢ 1,749.11 to read Gh ¢ 4,491.59.

Instead of presenting the actual amount of the port handling charges to the importer who contracted him to assist in clearing his goods out of the port, the agent rather allegedly inflated the cost so he could make a profit of GH¢ 2,642.48 with the assistance of the café operator.

The importer who was worried over the high port handling charges presented to him by his agent sought a clarification from the GPHA revenue centre where it was disclosed to him that the document his agent presented to him was fake and had been inflated.

The two have been handed over to the marine police unit of the Ghana Police Service by the Tema Port Security Manager, Colonel Joseph Punamane to assist in investigations.

“This is very dangerous because it is creating the impression that port charges are very high, so we found it imperative to deal with them by handing them over to the police,” the Port Security Manager communicated.

Meanwhile, the Port Authority continue to urge importers who do not trust charges presented to them by their agents to come with them to the Ports to seek the necessary clarifications.

“Our importers have the freedom to come to the port. We have the rule that allows the clearing and forwarding agent to come to the port with two representatives of the importer. They need to get involved if this is an identified problem. If the importer is to get the invoices, they can always be part of the process of assessing the invoice to confirm whether it is a genuine invoice or not. It is very important that they do that,” General Manager, Marketing and Corporate Affairs of GPHA implored.

The General Manager, Marketing and Corporate Affairs of GPHA, Esther Gyebi-Donkor said agents who falsify GPHA port charges create the impression to importers and the public that the cost of doing business in the Port is high.

Most of the time, because of these unscrupulous acts you have importers complaining that the Port charges are so high,” she stated.

She said the Port Authority is taking steps to ensure that importers know how much port handling charges they are required to pay.

“The importer can go with the clearing agent to pay the money in the bank. The GPHA service charges can be paid at any Ecobank or ADB branches. We are encouraging importers to get more involved so that we don’t end up having these negative people making importers suffer losses and making our ports expensive.”