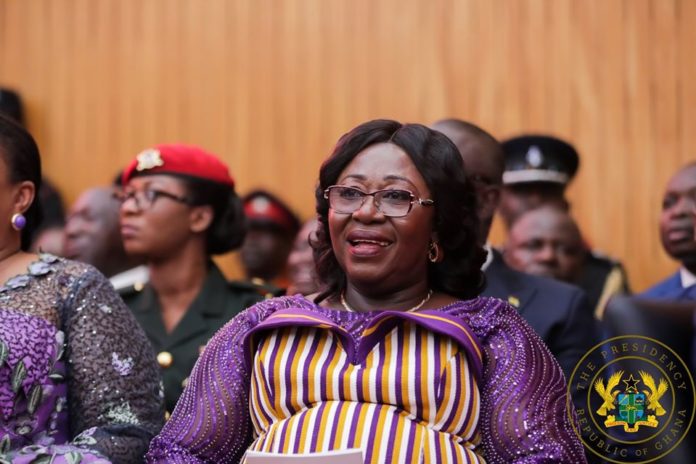 The Chief director of the Jubilee House, H M Wood, has debunked claims that the Chief of Staff, Akosua Frema Osei-Opare, is involved in the unlawful auctioning of state properties, especially some nine vehicles belonging to the Kumasi Technical University.

The National Democratic Congress (NDC) MP for South Dayi, Rockson-Nelson Dafeamekpor, has sued the state over the alleged public auction of nine unserviceable vehicles belonging to the Kumasi Technical University.

According to him, the approval for the auction, said to have taken place in December 2020, was given by the chief of staff, arguing she has “no authority to approve the disposal of the nine vehicles in the possession of the Kumasi Technical University by auction sale.”

However, in a confidential memo sighted by Asaaseradio.com, the chief director said there is no basis in the MP’s claims because the senior government officer has never breached any procurement laws or any of the laws of Ghana in carrying out her lawful responsibilities.

“In response to this allegation, it must be stated that it is simply not true. The chief of Staff has not signed any letter or made any declaration to that effect on any platform. Whoever has any evidence to the contrary may bring it up for verification,” Wood’s memo dated 29 September 2021 said.

He added: “As regards approval for auctions in the public sector, we must indicate that the function used to be performed by the Ministry of Finance during the days of the Provisional National Defense Council until 1993 when the function was taken over by the Office of the President.

“Until then, it was noted that the Ministry of Finance could not do the needed due diligence to establish the true state of properties earmarked by MDAs/MMDAs/ Institutions for auction before it gave approval for the exercise. Upon taking over the approval function, the Office of the President established a valuation unit which follows up on requests submitted to the office by the public entities and does verification/ assessment of the items and make recommendations on whether approval should be given or not for consideration by the Chief of Staff. From the above, it is clear that giving approval for disposal of state properties did not start with the current Chief of Staff.”

“Again the chief of staff does not request any entity to make available cars and properties to be auctioned as claimed in the publication attributed to the Member of Parliament for South Dayi.”

It therefore added that “from the foregoing, the law does not in any way impose a duty on such “corporate body” in this case the Kumasi Technical University, to necessarily get approval from the Ministry of Education before it carries out any of such activities. However, since it is a government policy that all public sector entities should obtain approval from the Office of the President before they purchase or dispose of any property acquired with public funds, the Kumasi Technical University was under obligation to seek and obtain approval from the Office of the President before it disposed of the vehicles in question.”

The memo said all auction proceeds are paid “directly into the Consolidate Fund at the Bank of Ghana by the auctioneers.”

“In the matter of the disposal of the vehicles deemed unserviceable by the Kumasi Technical University, the Chief of Staff followed the due process in granting the approval which is lawful and in line with Government policy,” Wood’s confidential memo concluded.