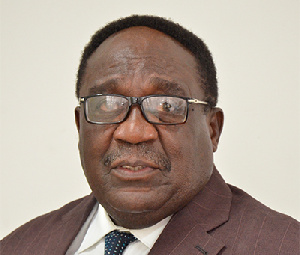 Myjoyonline reports that a notice to members of the Association from its president Alhassan Andani confirmed the demise of Mr Mensah.

“It is with a heavy heart and deep sorry that I on behalf of the Family of Mr D. K Mensah announce the passing of our beloved colleague.

I have on behalf of council spoken to Mrs Mensah and his son Eugene Mensah to convey our condolences and assurance of support to the family during this difficult time.

Let us all remember DK and his family in our prayers,” the notice read.

Prior to his passing the Ghana Bankers Association had recently announced that Mr Daniel Ato Kwamina Mensah was set to retire this year after serving his tenure.

As CEO of the Association, his duties involved the management of its Secretariat as well as serving as liaison between all licensed banks and all other external institutions including the West African Bankers Association, government and the Bank of Ghana.

Following his decision to retire, the Association then appointed former Chief Executive of UMB, John Awuah as the Deputy Chief Executive, to eventually take over when Mr D.K. Mensah retired.

Daniel Ato Kwamina Mensah had been in the banking industry since 1985.

He previously worked as an Educationist, during which period he taught at the various levels of the educational structure (primary, secondary and tertiary levels).

He has also chaired several boards including:

Mr. Mensah has done some great work in the banking and entire business community. Some of his research papers include:

An Agro-Industrial Study: The Oil Palm Industry of Ghana (Published by the National Investment Bank)

A survey of the Shea nut Industry in Northern Ghana (This study was carried out for the Centre for the Development Industry of the European Union for the Cocoa Research Institute of Ghana which at the time was looking for funding to improve the technology for the extraction of shea butter from the shea nut for export).

On “Obstacles to Intra-Regional Trade in West Africa – The challenge of Non-Tariff Barrier and Poor Trade Settlement System”) May 2010.