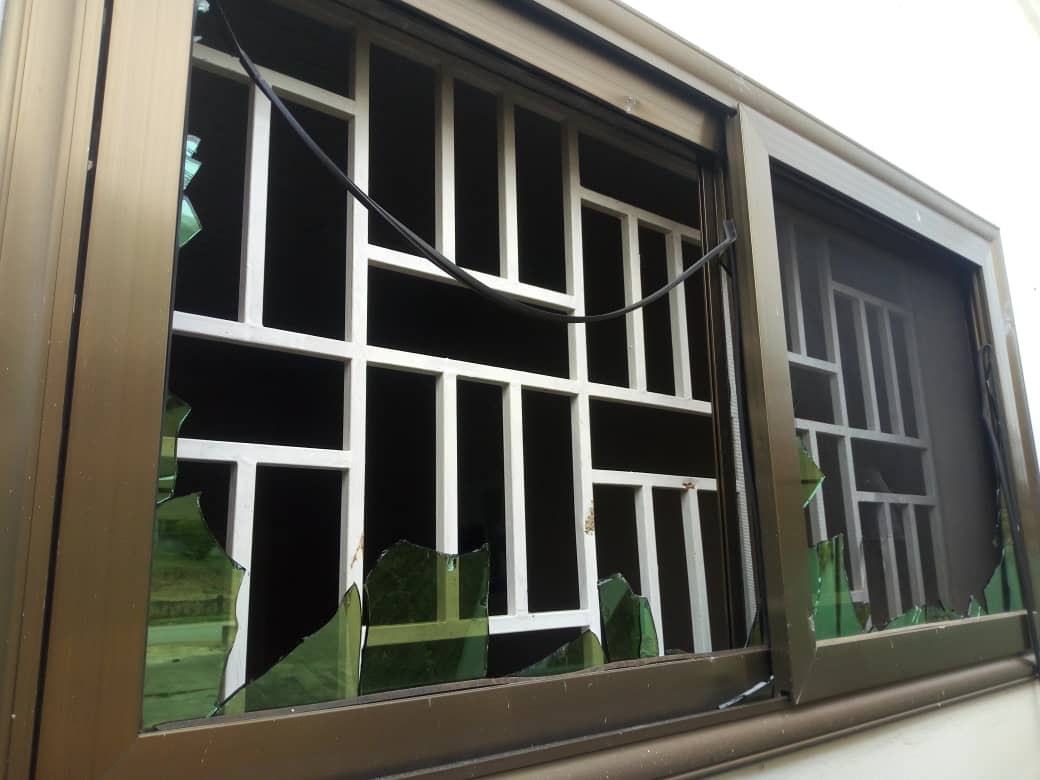 A supposed demonstration by some alleged hired thugs to protest against the indefinite suspension of the Central Regional First Vice-Chairman of the New Patriotic Party (NPP) on Tuesday, August 6, 2019, turned sour.

The alleged thugs brought in from some communities along the coast stormed the regional party headquarters at Nkafoa in Cape Coast and vandalized the party office, destroying several properties in the process.

All the sliding window glasses of the building were destroyed in the process. The windscreen of a Ford mini bus (E.250) with registration number GN 4629 – 19 were also not spared. 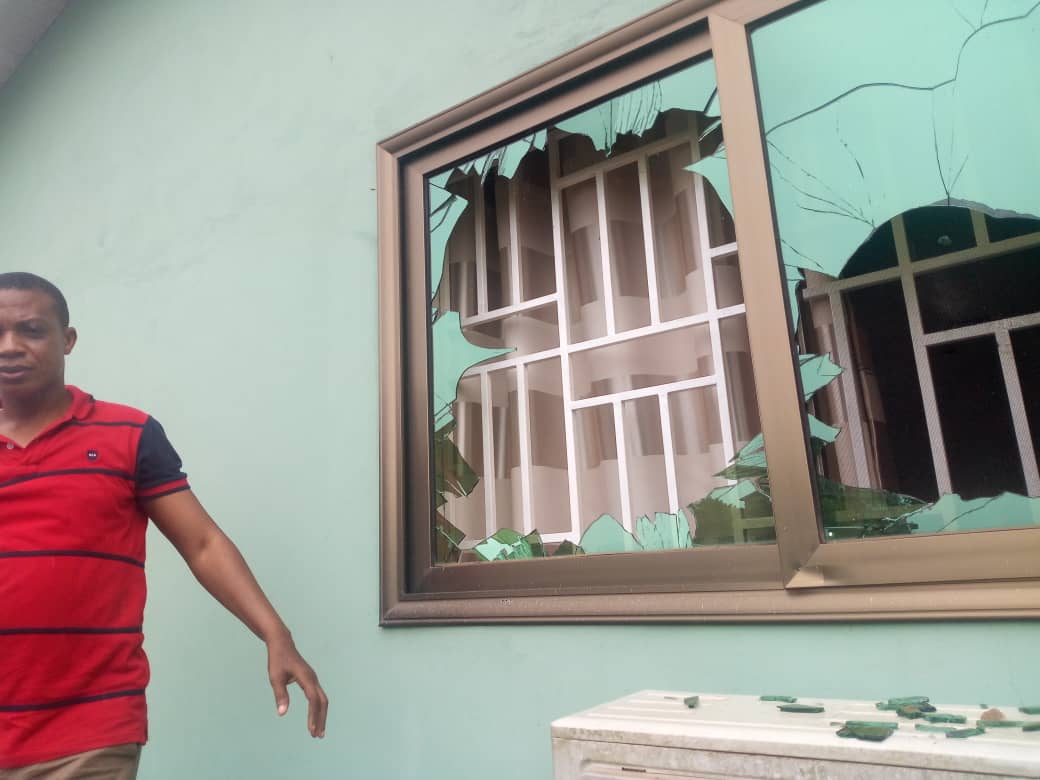 Addressing journalists amidst tight security at the premises of the party’s headquarters in Cape Coast, on Wednesday, August 7, 2019, the Regional Secretary of the party, Richard Takyi-Mensah described such action as diabolical and which has never happened in the history of the party in the region.

The dastardly act, he noted, has been reported to the Police and admonished the men and women in black uniform to do thorough investigations into the matter and bring the perpetrators to book. 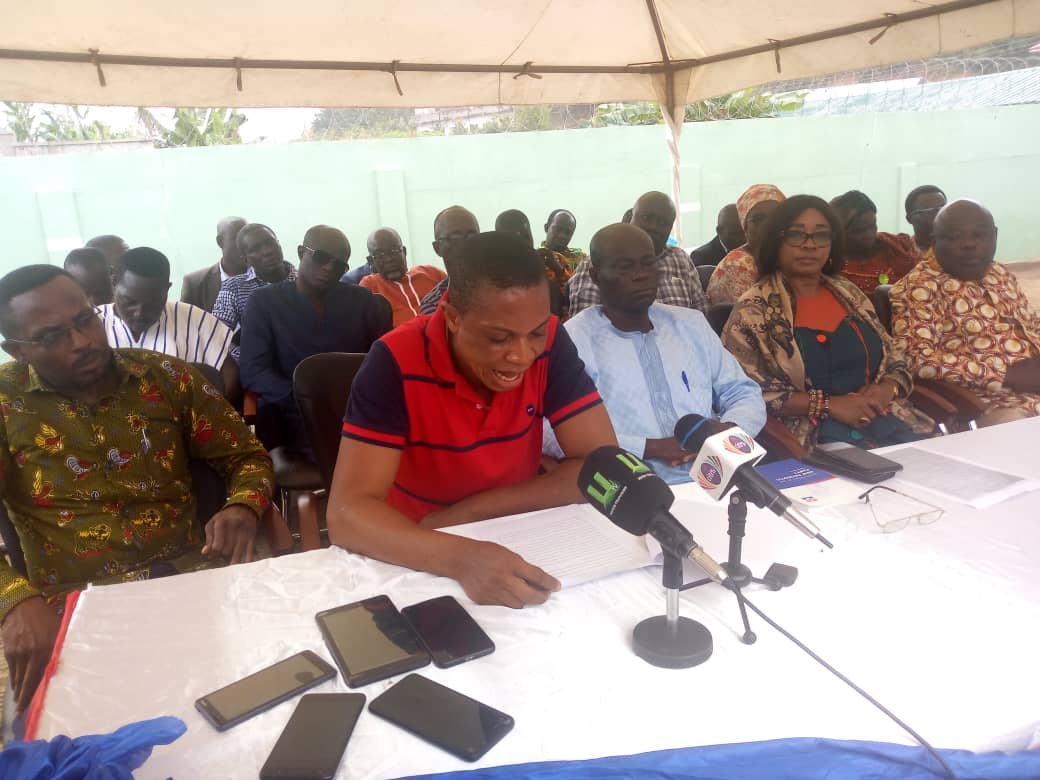 “The vandalization of properties at the Regional Party Offices by some hoodlums yesterday has been reported to the Police and we are admonishing the police to do its thorough investigations to fish out the perpetrators of this dastardly act for them to face the full rigors of the law.

He said the indefinite suspension of the First Vice-Chairman of the party, Horace Ekow Ewusi following the adoption of the recommendations by the Regional Executive Committee was procedural and constitutional and urged anybody who is aggrieved by the decision to go through the party’s laid down procedure for seeking redress rather than to resort to violence and vandalize the party’s properties. 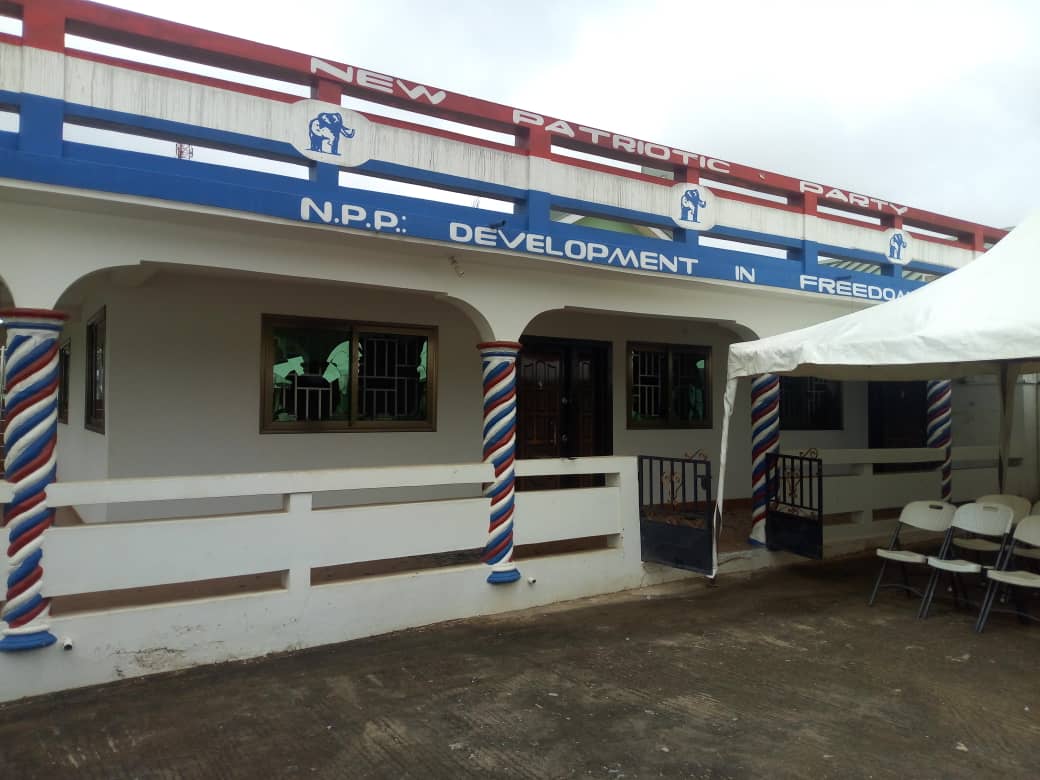 “We have never witnessed this kind of violence in our party in the region before and therefore we call on all party officials, members and supporters to adhere to party rules and decisions as we are not going to countenance any kind of indiscipline on the p arty of any party officer or member in the region”, he noted.

On Tuesday, August 6, 2019, some alleged hired thugs of Ekow Ewusi hit the streets of Cape Coast to protest against the First Vice-Chairman’s indefinite suspension. The group later petitioned the regional party executives following which they proceeded to the party’s headquarters at Nkafoa to vandalize the entire area.

The said petition, according to the group was signed by thirteen (13) Constituency Chairman of the party from the region who called on the national party executives to intervene. 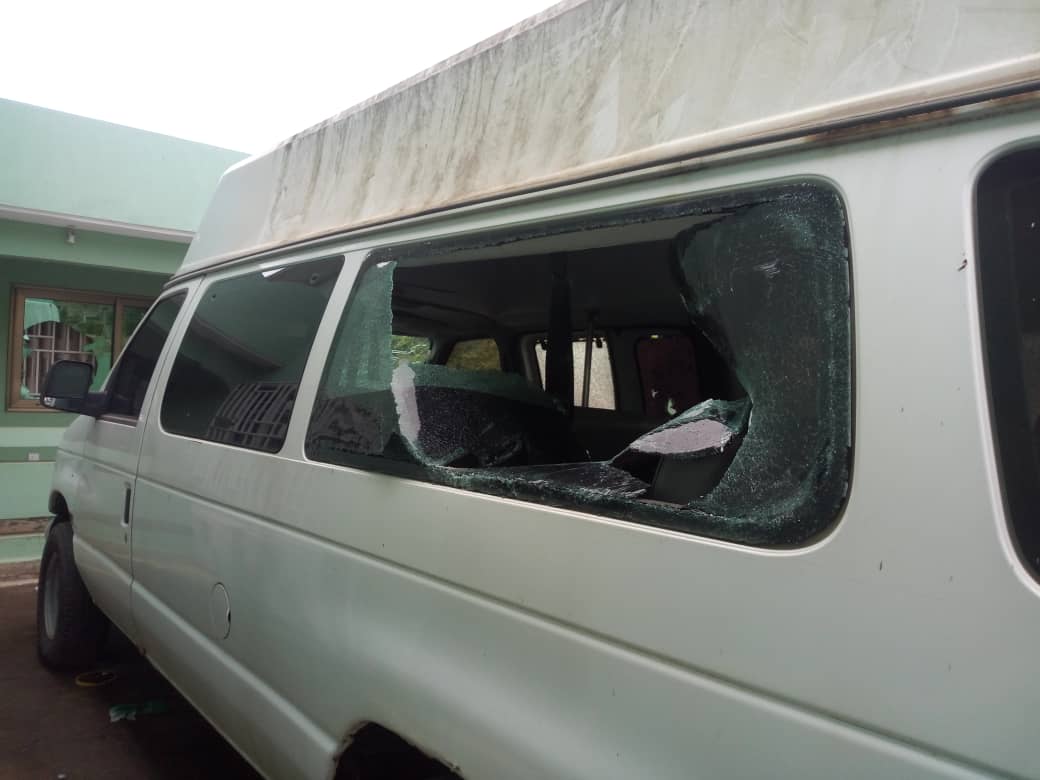 However, the Regional Secretary, Takyi-Mensah said the said petition is a suspect after subjecting it to thorough inspection.

“In fact, the petition is a suspect in the sense that seven of those supposed Constituency Chairman were not at the meeting where the Regional First Vice-Chairman was suspended indefinitely. These Constituency Chairman who were not at the meeting but have signed the so-called petition are Mr. Stephen Kojo Arhim of Cape Coast North, Mr. Desmond Sam Essandoh of Agona East, Mr. Omar Adam of Gomoa Central, Mr. Essuman Prah of Komenda Edina Eguafo Abirem, Mr. Timothy Terry Tweneboah of Heman Lower Denkyira, Mr. William Abban Ghansah of Cape Coast South and Mr. Theophilus Konadu Taylor of Assin South. It is intriguing that some of the Constituency Chairmen who are supposed to have signed that petition could not write their names and did not even know the names of their respective constituencies?”, he quizzed. 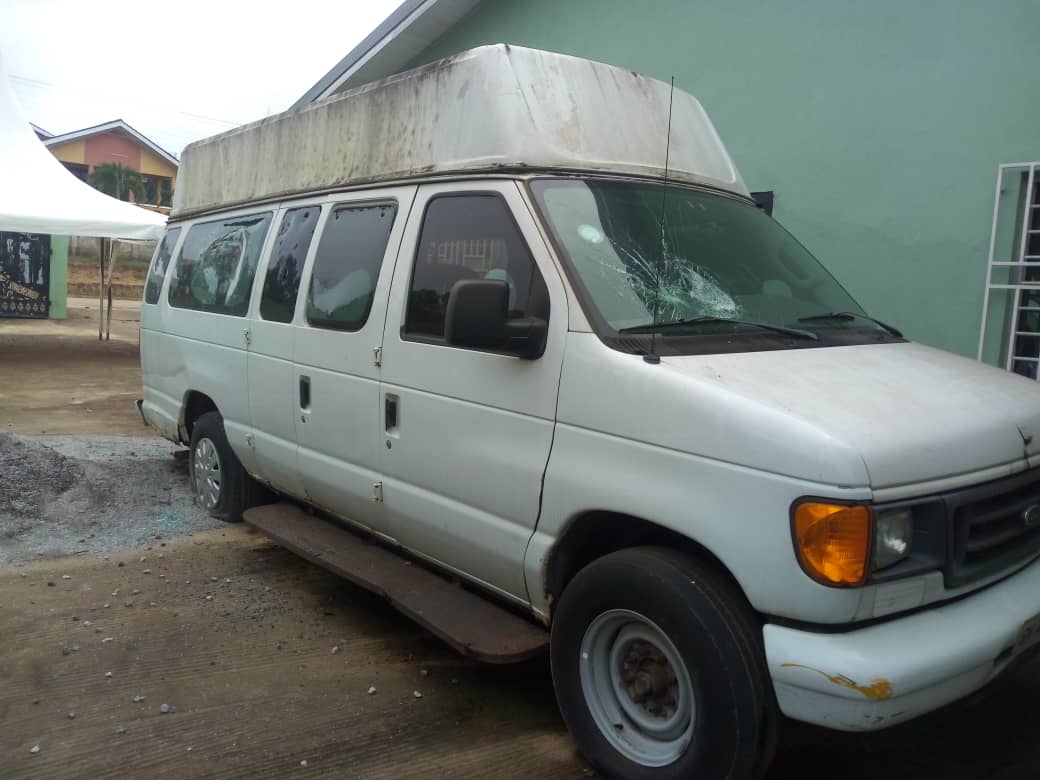 The decision for Ewusi’s suspension was taken on Wednesday, July 31, 2019, by the Regional Executives Committee when they met in Cape Coast to consider the recommendations made by the Regional Disciplinary Committee after it inquired into the allegations levelled against him by one Edward Okraku Adum.

The Regional First Vice-Chairman of the NPP had earlier been suspended by his boss, Robert Kingsley Kutin Jnr and referred to the Regional Disciplinary Committee for further investigations when he declined to respond in writing to the allegations levelled against him by Mr. Adum in his petition to the National Security Minister of which the Regional Chairman and some others were copied. 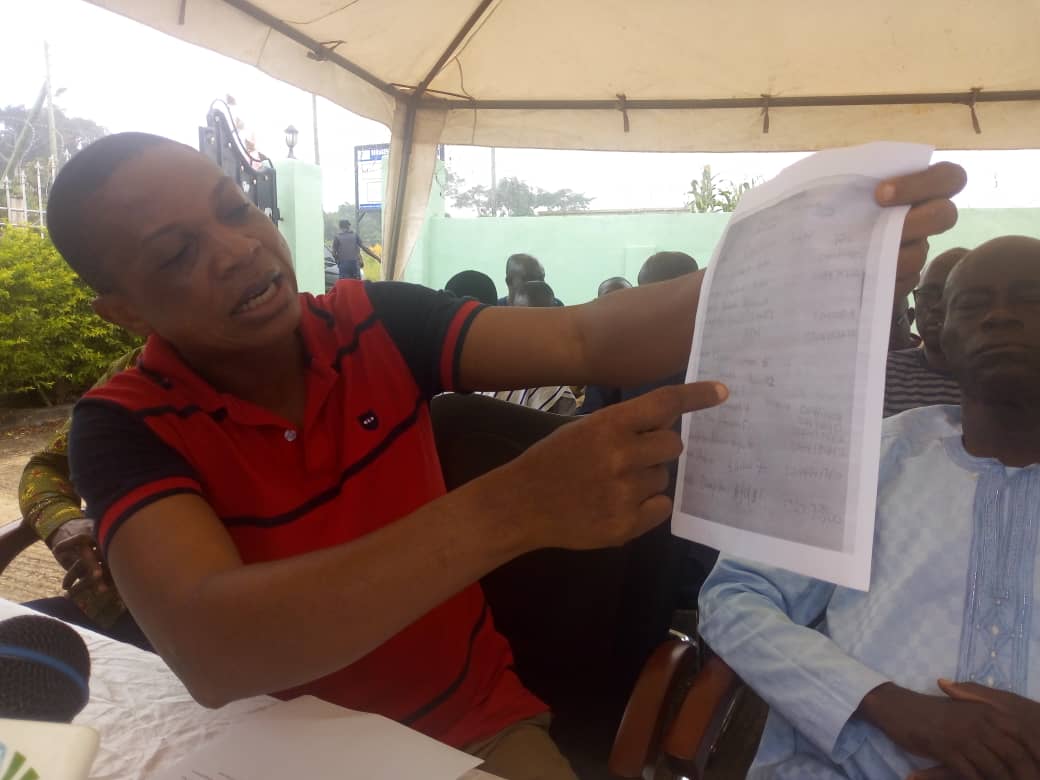 The Disciplinary Committee had contended in its report that Ekow Ewusi failed to appear before it for hearing despite providing him the platform to speak to the issues at stake.

Letter to the Disciplinary Committee

The letter indicated that upon receipt of a copy of the letter under reference, which was addressed to the National Security Minister and copied to his office, among others, the Regional Chairman directed the Regional Secretary of the Party to forward same to the attention of the First Vice-Chairman with a request to him to react to the allegations contained in the letter, as he had not been copied.

The letter indicated that the Regional Chairman requested for the reaction of the First Vice-Chairman to enable him arm himself with Ekow Ewusi’s response in the event the matter came up for discussion at the National Executive Council (NEC) or National Council Meeting.

According to the forwarding letter, Ekow Ewusi was given a week to submit his response but he refused or failed to respond to the letter.

It was reported that when the First Vice-Chairman failed to reply to the Regional Chairman’s reminder, Mr. Kutin Jnr raised the issue at a meeting by the Regional Executives Committee held on July 5, 2019.

According to the forwarding letter, Mr. Kutin Jnr did not accept a verbal reply and requested the First Vice-Chairman to respond to the letter formally since the letter under reference had been copied to the President of the Republic and the British High Commissioner in Ghana and the security agencies.

The letter intimated that Ekow Ewusi failed to honour his pledge to submit his response within a week. That notwithstanding, the forwarding letter intimated that the allegations contained in the letter under reference have the potential of bringing the image of the Party into dispute and that necessitated reference of same to the Regional Disciplinary Committee.

The Committee in probing the matter took into consideration documents that were made available to it by the Regional Secretary’s letter dated July 20, 2019, the First Vice-Chairman’s completed Nomination Forms for the selection of the Regional Executives – April 2018 to 2022, and the letter from Edward Okraku Adum which was addressed to the Minister of National Security.

It also took into consideration the establishment of the jurisdiction of the Committee in handling the subject matter under reference;

Jurisdiction of the Committee

The Committee further considered whether it has the jurisdiction to probe the matter by referring to Article 3 of the Constitution of the Party which provides as follows “The Regional Disciplinary Committee shall have original jurisdiction in all matters affecting discipline at the Regional level with respect to the Regional Executive Officers, and other key members of the Party in the Region, including Constituency Executive Officers, Patrons and Founding Members”.

Having satisfied itself that it has the authority to investigate Ekow Ewusi whose conduct has been reported to the Regional Chairman by virtue of a copy of the letter addressed to him, proceeded to probe the matter.

In doing so, the Committee also considered whether the allegation contained in the letter under reference constituted a disciplinary matter of which it came to the conclusion that it does after referring to Section 14 of the Nomination Form for the selection of Regional Executives which requires applicants to declare if one has ever been convicted of any offence.

Article 4 A (2) of the Party’s Constitution provides as follows “A Member shall be disqualified from holding any office or contesting any election in the Party if he or she has been convicted and or sentenced by a Court of competent jurisdiction in any offense including high crime, high treason, treason or an offence involving the security of the state, dishonesty fraud or moral turpitude”

Article 7 (g) of the Party’s Constitution defines Misconduct as “bringing the name of the Party into disrepute”.

The Committee considered that the allegations so made, if proven will constitute an affront to the dignity of the position of the Vice Chairman in the hierarchy of the Party and as such expose the party to ridicule.

The Committee observed that the author (Mr. Adum) of the letter under reference reports he and the 1st Vice-Chairman were prison mates in the United Kingdom and that the 1st Vice President had been convicted for stealing a vehicle.

“That in answer to Section 14 of the Nominations Form filed by the 1st Vice-Chairman for the Executive position he answered NO indicating that he had never been convicted for any offence”, the Disciplinary Committee’s report observed.