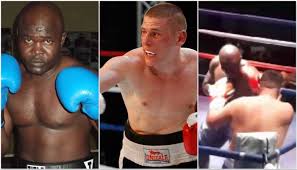 Famous Ghanaian boxer, Braimah Kamoko aka Bukom Banku has brought honor to himself and his fans by winning his first-ever international fight through a knockout in the UK.

Indeed Bukom Banku was not lying when he advised his fans to come to the stadium early in order not to miss the bout because he will drop Ferenc very early. The game ended within the first 10 minutes.

This is the first fight outside Ghana for the WBO African champion, Braima Kamoko because he has been denied international fights due to his alleged poor eyesight. His promoters over the years have insisted it won’t go down well for him with such poor eyesight internationally.

Bukom Banku’s worse defeat was in 2017 when Bastie Samir game him the beatings of his life after he taunted the Ghanaian boxer (Bastie Samir) for months.