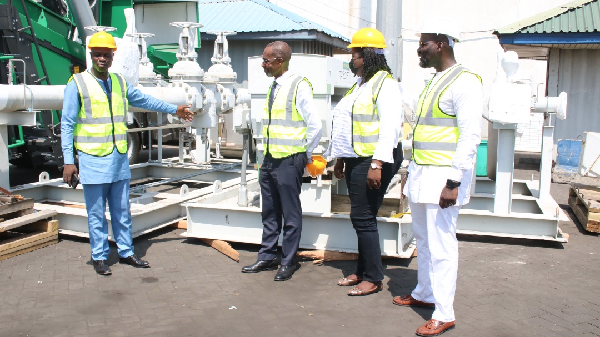 The Bulk Oil Storage and Transportation Company Limited (BOST) is set to commence rehabilitation and expansion works on its petroleum transmission lines from Tema to Akosombo.

This follows the delivery of 5,400 pieces of 12-inch pipes from the Unites States of America.

The pipes, procured in 2009 for $63.2 million through a US Eximbank facility only arrived at the Tema Port last Saturday.

Officials of BOST had engaged the suppliers for an agreement on some clauses in the contract, 12 long years after the purchase.

Officials said BOST’s inability to take delivery of the pipes and associated accessories made up of valves, flow meters, pumps and generators was due to “contractual disagreements”, which left the items at the mercy of the weather.

The Managing Director of BOST, Mr Edwin Provencal, said the company incurred an additional $8 million on sandblasting and recoating of the pipes prior to their $2.1 million shipment to Ghana.

Mr Provencal, who led some members of the company’s board of directors to inspect the pipes at the Tema Port yesterday, told the media that the delivery had come at a time that BOST had commenced processes to rehabilitate the 70-kilometre transmission lines by replacing the existing six-inch lines to improve turnaround time and enhance operational capacity.

He pointed out that the reactivation of the Bolgatanga Depot for export had made it more necessary for high volumes of petroleum products to be transferred between Tema and Akosombo for onward transmission to Buipe through the river barges to meet the surging demand in the northern parts and the landlocked countries.

Mr Provencal noted that the expectations were that, the new pipeline would increase the volume from Tema to Akosombo by three-fold to increase the turn-around time of the barges.

“This will tremendously improve on the utilisation and turnover of our marine assets in line with the vision of making energy affordable, and as part of the four-year strategy of BOST to become operationally efficient, we are looking forward to improving the proportion of product volumes carried through the cheapest means of transport,” Mr Provencal said.

Mr Provencal intimated that the company would deploy fibre optic cables along the lines with alert systems to check for intrusion and incidents of vandalism and siphoning of products.

The Chairman of the company’s board, Mr Ekow Hackman, said the pipes were virtually abandoned after purchase until 2018 when the former MD of the company, Mr George Okley, took steps to bring them.