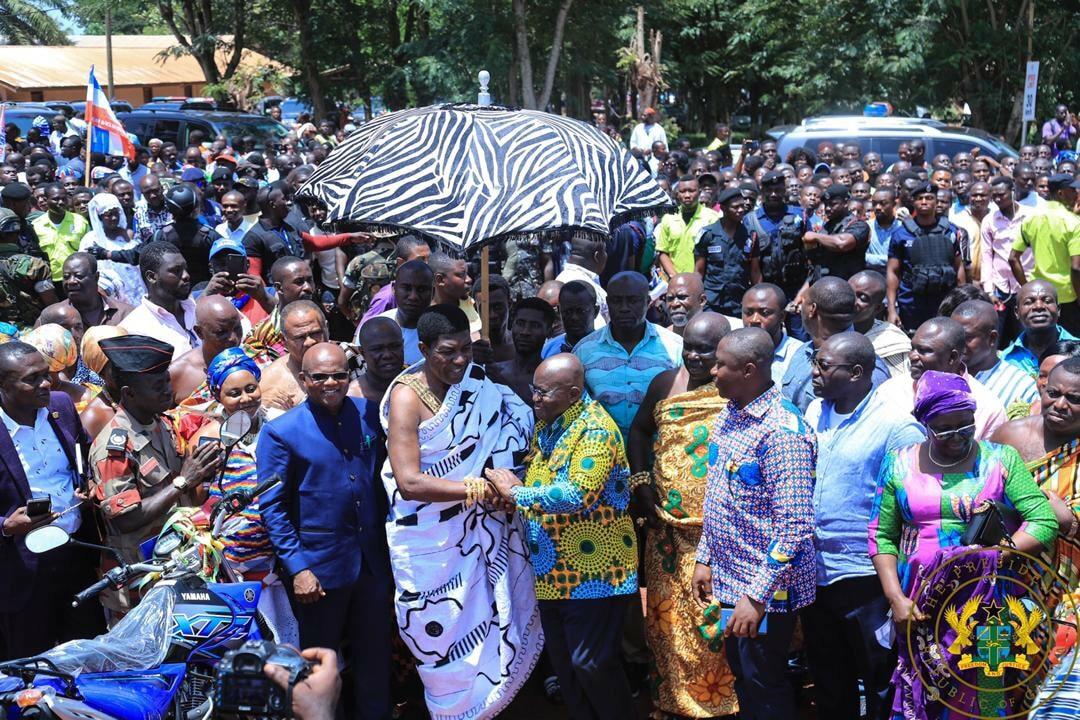 The Paramount Chief of the Techiman Traditional Area, Nana Oseadeayo Akumfi Ameyaw IV, says residents of the newly created Bono East Region, including those of Techiman, Kintampo, Nkoranza, Atebubu, Amantin, Yeji, and Abease, will always continue to show their appreciation to the President of the Republic, Nana Addo Dankwa Akufo-Addo, for the creation of the region.

According to Nana Oseadeayo Akumfi Ameyaw IV, the Chiefs and people of the Region have always advocated for the creation of Bono East, and are appreciative of the fact that it was under the Presidency of Nana Akufo-Addo that their wishes were fulfilled.

“The Constitution of Ghana gives a sitting President only four years for his first term. We go to the polls again next year? What should we do for Nana Akufo-Addo?” he asked the gathering.

He continued, “If you say we should him our appreciation next year, let us do so. I don’t want you to go and disgrace me, however,” the Omanhene added

He made this known on Monday, 15th April, 2019, when he held a durbar in honour of President Akufo-Addo, at his palace in Techiman, on the 2nd day of the President’s tour of the Bono East Region.

“Many more of these laudable goods are on their way into the region. Hospitals, schools for Techiman, Nkoranza, Kintampo, Yeji, Abease, Amanteng through to the river (Yeji), so take note of that,” he added.

Visibly impressed by the achievements of the President over the last two years, the Techiman Omahnene bemoaned the length of the mandate for Presidents of the Republic.

“Some time ago, President Kufuor brought this issue up but Ghanaians did not pay particular attention to what he proposed. The four years of the constitution is not ideal for us. If it is possible, and Nana (President Akufo-Addo) would help us, something should be done about it to lengthen it, to say five or six years so that we can have adequate time for development,” he added.