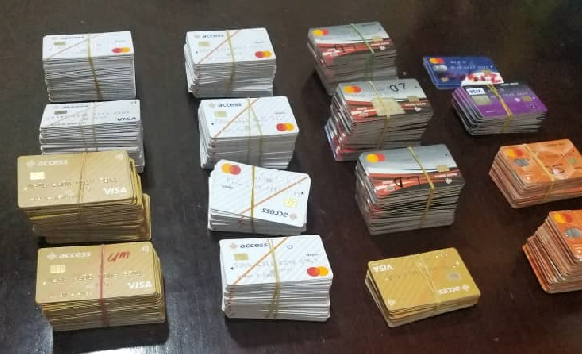 A team of financial experts from the Bank of Ghana (BoG) is assisting the National Intelligence Bureau (NIB) to investigate how a 42-year-old man, Bachir Musa Aminou, illegally acquired 656 ATM cards connected to nine banks for trans-border business.

The team has roped in the Financial Intelligence Centre (FIC) and the Economic and Organised Crime Office (EOCO) to expedite the investigative process.

The Head of the Financial Stability Department at the BoG, Dr Joseph France, said he suspected that there were some high-profile accomplices who aided Aminou in the ATM fraud business.

The NIB, on September 12,busted Aminou, who claims to be a Nigerian, with the 656 ATM cards connected to nine banks

operating in Ghana and Nigeria.
One of the banks is wholly Ghanaian, while the remaining eight banks operate in the country but have Nigerian origins.

Explaining the investigation process, Mr France said the FIC and EOCO would also determine whether the ATM cards had been used for any financial transactions.

“We will support the investigative team with the relevant aspects of the law to help them prosecute this case,” he said.

“The team will investigate how the suspect acquired that number of cards and who is behind it,” Mr France told the Daily Graphic last Monday.

“For now, the payment system and Fintech office (Financial technology ) will take custody of the cards, after taking inventory, while investigations are ongoing,” he added.

Aminou, who holds a Nigerien passport, allegedly concealed the cards in a black plastic bag containing kola nuts bound for Dubai in the United Arab Emirates.

He was busted at the Kotoka International Airport on September 12 when he was going through departure formalities en route to Dubai.

The suspect arrived in Ghana on August 20, this year, on transit to Dubai.

Aminou claimed, during interrogation, that 132 of the cards were his, and that he collected them from his extended family for his business.

He said the rest of the cards were for his business partners in Dubai.

According to the suspect, he was a businessman who plied his trade in Dubai, China, Nigeria and Ghana.

He has already denied any links to fraudulent activities.

Aminou also had in his possession $12,000 and a list of the PIN numbers of some of the ATM cards.

ATM fraud has been a major challenge to the financial sector.

According to a BoG fraud report, ATM/POS-related fraud accounted for 32.2 per cent of total fraud loss in the banking sector in 2020.

ATM card fraud recorded for 2020 mainly involved the fraudulent appropriation and use of customer card details for online shopping and unauthorised debits and transfers from victims’ accounts through electronic banking.

Other instances include incidents where culprits steal victims’ cards and use them to make withdrawals from ATMs.

According to the report, the outbreak of the COVID-19 pandemic forced bank customers to use alternative channels for payments and bank services.

It stated that poor personal safety perception and inadequate customer sensitisation by banking institutions might be the cause of the increase in the ATM/POS fraud type.