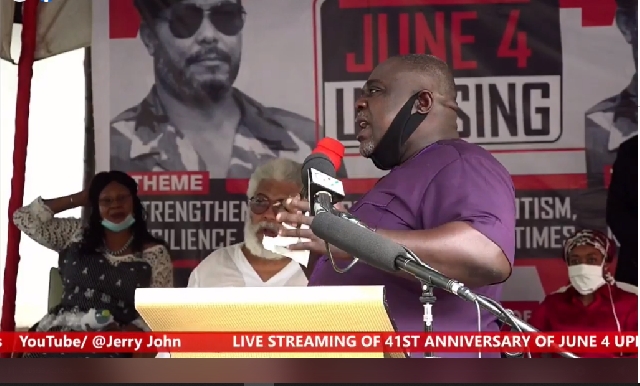 Mr Koku Anyidoho has bemoaned the insults rained on former President Jerry John Rawlings and himself by their own party members of the National Democratic Congress (NDC) on social media.

Speaking at the 41st-anniversary of the June 4, 1979 uprising in Accra on Thursday, 4 June 2020, the former Director of Communication at the Presidency during the Atta Mills administration, said: “Well, I don’t know whether I’m emotional or I’m passionate; certainly I’m not angry, no. Maybe a bit emotional”.

“The lies on social media! I happened to travel with the founder and the leader to Ho to go and commiserate with the regional chairman, Comrade Ametepe, who had lost the wife.

“The Friday prior to that movement, the founder had been so insulted on social media only because he had attended the funeral of the late Brigadier Ahiaglo and some picture was captured of him having supposedly sat and turned his back to the flag bearer of the NDC. So insulted, until we got to Ho and he asked Dan to go into the vehicle and pick up a pillow. And when that pillow was brought, he showed it to everybody and said: ‘This is the pillow that I’ve been sitting on in my vehicle for years because a young officer, I tried landing from a parachute, I didn’t land well and my back has been aching me for decades, so, when I sit, I have to sit and turn every now and then until I’m comfortable’. Yet, he is insulted”.

“Me, I’m insulted. People are paid: ‘Go and insult him, call him names’. The other side, they have the airtime; they propagate what they want to propagate. We have airtime and it is to cast aspersions at our own, call them names: traitors, whatever.

“Well, the flame has been lit. Today, we are spending the anniversary. It’s up to the leadership. There’s the desire, there’s the passion but if you don’t lead and lead well, don’t blame anybody for your woes”, Mr Anyidoho said, adding: “Every team coach decides the players who will play on the team. If you are not even in the reserve, you dare not wear a jersey and go on the pitch – it’s against the rules”.

In his view, “Coaches should choose their teams and be responsible for the results of the games that they encounter”.

Citing Mr Rawlings’ leadership over the past decades to drive home his point, Mr Anyidoho said: “Forty-one years ago, if the coach and the leader did not lead us onto the park and the pitch to win matches, we won’t be celebrating June 4th.”

“Those of us that have come after him, let us play matches and win matches. We may not win everything but with candour and a clean heart, I’m sure we can win many more matches”, he admonished, insisting: “The orchestration on social media is enough and people must be called to order”.

“At this juncture, founder, we thank you for your words of exhortation. The flame shall not die; the passion shall not die. Those of us who know what you stand for, will continue to support what you stood for; of course, and your daughter, when she was walking in, Honourable Zanetor, you mentioned her name. They say you hate the NDC, yet your daughter is a member of parliament on the ticket of the NDC. Those who say you hate NDC, ho many of them have put their children in the forefront of NDC politics?”