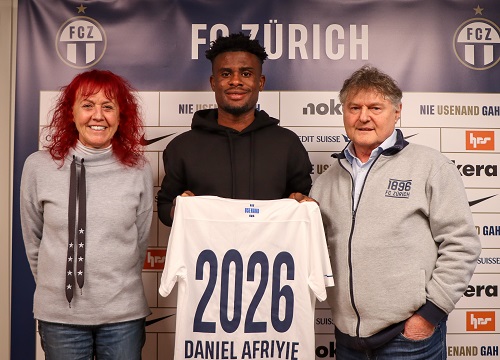 “Hello Zurich fans, I’m Daniel Afriyie Barnieh, the new striker for FC Zurich. I can’t wait to see my new teammates. I’m here to help the team to progress.” These were the first remarks by Ghana international and former Hearts of Oak striker Daniel Afriyie Barnieh after he was unveiled by FC Zurich yesterday following the completion of a dream move to the Swiss giants.

After weeks of uncertainty, former Hearts arrowhead finally signed a three-year contract with FC Zurich that would keep him with the Swiss side until the summer of 2026.

Yesterday, officials of the club unveiled the 21-year-old at a brief ceremony after sealing the move for the promising player. Subsequently, the club confirmed the deal on its website but indicated that “the parties have agreed not to disclose the details of the transfer.”

However, the Daily Graphic understands that Hearts stand to gain not less than $200,000 in transfer fees.

Marinko Jurendic, Head of Sports at the 13-time Swiss Super League champions, described their latest Ghanaian signing as a “dynamic and versatile attacking player who has a courageous style of play”.
He welcomed Barnieh to his new club and encouraged the player to take the next step in development at FC Zurich to help realise his career dreams as well as help improve the game.

Before signing for the Swiss club, Barnieh had renewed his contract with the Phobians for two months until the end of the upcoming champions of African Nations (CHAN) tournament in Algeria.
The renewal was strategic to ensure that Hearts benefitted from his contract to FC Zurich.

Barnieh, who helped Hearts to retain the MTN FA Cup last year, having previously won the betPawa Premier League and MTN FA Cup double the previous season, is a key member of the Black Galaxies team participating in the CHAN tournament which commences on January 13.

He is expected to join his new Swiss side after the continental tournament reserved for African players plying their trade in their domestic leagues.

Before joining the home-based senior national team, Black Galaxies in camp, Barnieh was part of Ghana’s squad at the just-ended FIFA World Cup in Qatar and has made three appearances for the senior national team since making his international debut in a friendly match against Japan on June 10, 2023.

Last year, Barnieh won the Sports Writers Association of Ghana (SWAG) Home-Based Footballer of the Year after captaining the Black Satellites to win the 2021 U-20 Africa Cup of Nations in Mauritania and domestic double with Hearts in the 2020/21 season.

Again, he has been nominated for the second successive year for the SWAG Home-based Footballer of the Year prize alongside Asante Kotoko and Black Galaxies teammate Ibrahim Danlad and former AshantiGold forward, Yaw Annor, at the 47th MTN-SWAG Awards which comes off in Accra on January 28, 2023.