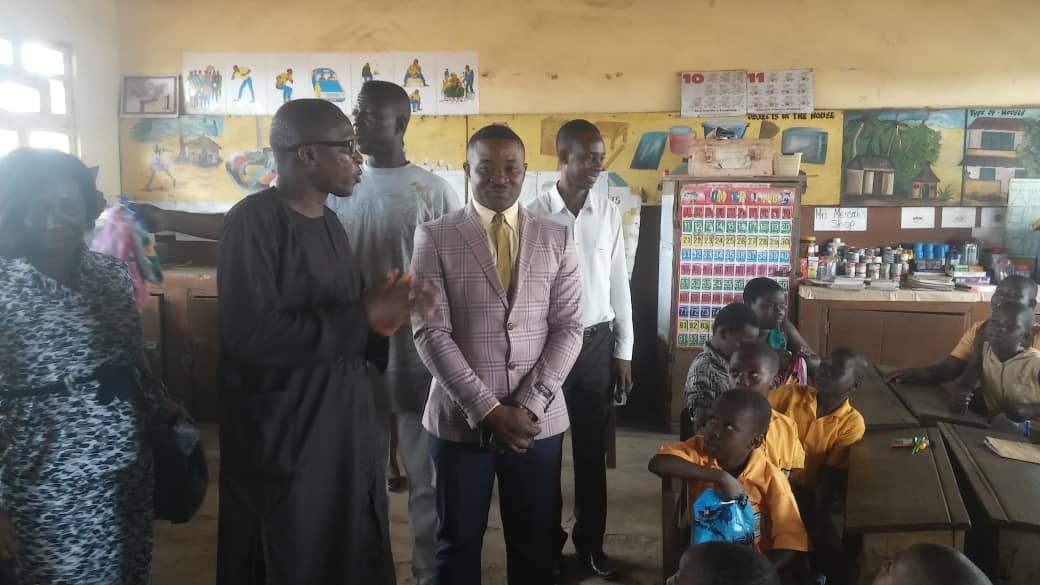 toured some selected basic schools in Accra to mark “My First Day at School” an event to commemorate the beginning of a new academic year for fresh entrance.

He was accompanied by high powered delegations from the Assembly including the municipal coordinating director, Eugenia Agbenyegah and some party officials of the ruling government.

The visit took the MCE and his entourage to the St. Francis Xavier RC Basic School, Unity Junior Basic School all at Kotobabi and Darul-Hajra Islamic basic school at Maamobi.

The MCE who is affectionately called Aminu MZ encouraged the pupils to take their academic work seriously, be punctual at school and play their part as pupils with a greater future and responsibilities to Ghana.

He also interacted with teachers in the schools and tasked them to put in their best in the delivery of their professional services to mother Ghana.

Hon. Aminu MZ and his team distributed educational materials such as exercise books packs of crayons, pencils, erasers, fruit juice and biscuits to the pupils in each of the schools visited.

At both schools, the pupils and teachers expressed their gratitude to the MCE and his team and asked for more of such visits.

At the Darul-Hajra Islamic basic school the headmaster of the school, Mr. Martin Kpadenu complained bitterly to BestnewsGH.Com of congestions in the school created as a result of a collapsed classroom block for class two pupils.

He said the school authorities in an attempt to salvage the situation, converted the only teaching staff room into a classroom to accommodate class two pupils who became stranded following their collapsed building.

Mr. Kpadenu said the situation has created an atmosphere of inconvenience for the teaching staff, a situation he said could affect academic work of the pupils if not addressed immediately.

He appealed to the assembly to complete work on a new school block under construction which was started by the community members but stopped due to lack of funds.

At the Unity Junior Basic School, teachers in that school also expressed concern over lack of toilet facility for the entire school population.

The teachers told a sad story of how pupils on daily basis trek to cross streets at the peril of their lives to access a nearby KVIP.

He was however quick to state that the Ayawaso North municipal Assembly which was recently carved out of the Accra Metropolitan Assembly(AMA) is challenged with funding..