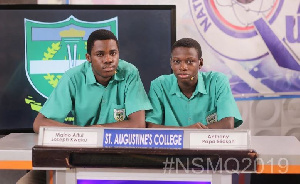 St. Augustine’s College from Cape Coast has won the 2019 edition of the National Science and Maths Quiz (NSMQ) competition.

It was a fierce battle between PRESEC and AUGUSCO during the contest in the fourth and final round.

The school was fired up to add a second to the trophy they last won in 2007. They flaunted their strength over the two challengers and finished the contest.

The National Science and Maths Quiz is delineated to promote the study of science and mathematics.

The National Science and Maths Quiz has been a remarkable event competition that sought to bring to senior high school students in Ghana a unique nostalgic feeling.