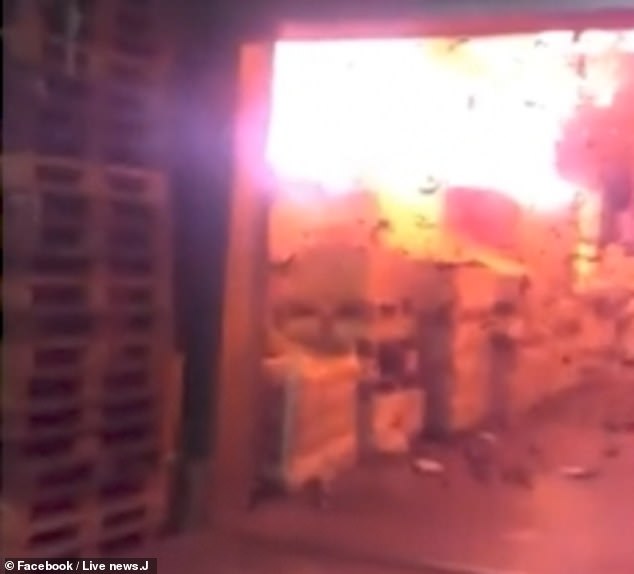 At least two million bottles of wine have been destroyed in a horror fire in South West France.

The blaze broke out on Tuesday in a warehouse north of Bordeaux belonging to Sovex, which markets a range of red, whites and roses.

Many of them were in boxes on wooden pallets that erupted in flames for so far unknown reasons.

Firefighters intervened very quickly at the scene of the disaster, which began around 3.30pm, and evacuated around 80 people working on the site.

‘In total, two million bottles of alcohol were destroyed,’ said an investigating source, who added that 60 firefighters spent 15 hours fighting the blaze.

A video posted on You Tube showed a Sovex worker shouting in panic as the fire intensified, and colleagues left the building.

Flames can be seen engulfing the wooden pallets near the ceiling of the warehouse, as pieces of debris were sent flying through the air.

The warehouse stored the wine in piles of boxes up to 35 feet high, and most were covered in flammable materials. Despite this, there were no injuries reported.

On Wednesday morning, company executives met with experts and insurers to estimate the loss, which is likely to be well past a sum equivalent to £10million.

Judicial police are also investigating the cause of the blaze, which charred half of the building in the Bordeaux suburb of Gironde.

It follows the fire at Notre Dame Cathedral in Paris the previous day, when the ancient place of worship lost its spire and roof.