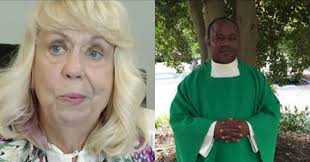 An American retired teacher identified as Kathy Coll has filed a lawsuit against a Nigerian Catholic priest. The woman alleged that she had been raped by the priest three years ago in December 2016.

68-year-old Coll had explained that the incident had occurred in her home when the priest claimed he was there to drop a Christmas card for her. She said she had been watching a game and the priest joined her. According to her, she had gone downstairs during the game to get something for them to drink, but the priest identified as Cyprian Duru followed her and raped her.

The woman, who was 65 years old at the time, said the priest had asked ‘how has it been since her husband died’ while he was raping her. Coll explained that she had felt safe to invite him home because she had been one of the members of the parish who welcomed him when he came from Nigeria. She noted that she would drive him to school since he was attending a school not so far from where they both lived close to the church. She said he would jog by every morning and stop for a chat.

According to her, after the incident, she took a bath and went to a nearby hospital for a rape test. She stated that she reported the incident to church the next day and filed for a lawsuit. Father Duru was stripped of his abilities to dress, act, or officiate as a priest, but he was still going to school close by. The lawsuit seeks unspecified monetary damages and information on Duru’s whereabouts and his status with the Church. The ex-priest had also claimed that the incident was consensual.

Coll revealed that she started a support group for Catholic women who might have been abused. She noted that she believes someone else was also Duru’s victim. She called the group SMG Catholic Women’s Support Network.