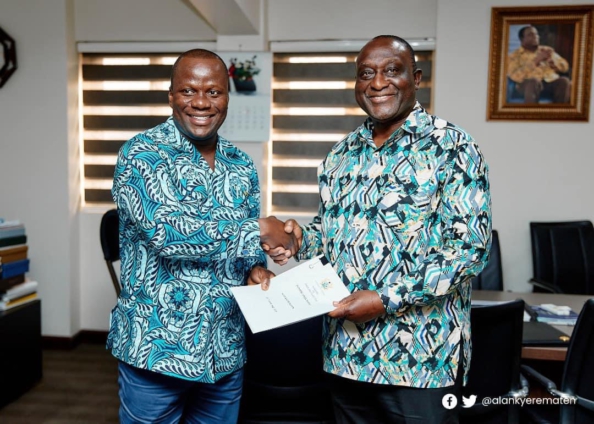 This follows a directive from the President, Nana Akufo-Addo through his Director of Communications at the Presidency, Eugene Arhin.

On Friday, January 13, President Akufo-Addo in a press release directed the Lands and Natural Resources Minister to assume responsibility as the Trade and Industry Minister pending the appointment of a substantive person.

His caretaker duties were to take effect from January 16.

Earlier, the President had appointed Finance Minister Ken Ofori-Atta as caretaker Minister but a new release indicated that the MP for Damongo was to take over from the previous sector minister.

The former Minister of Trade and Industry submitted his resignation letter to the President on Thursday, January 5, 2023 and formally declared his intention to contest the NPP flagbearership race.

According to him, he will pick the form when nominations are opened by the party.

Delivering an address in a national broadcast, the man popularly called ‘Alan Cash’ expressed his appreciation to the President for the opportunity to serve the people of Ghana and his readiness to be a transformational leader should he be voted as president.

“Fellow countrymen and women, if by the will of God and through your goodwill, I am voted first, as the flagbearer of the NPP and subsequently as President of the Republic in the next general elections, I will become the transformational leader of our time, who will build on the foundations laid by successive leaders of our nation over the last sixty-five (65) years,” he pledged.