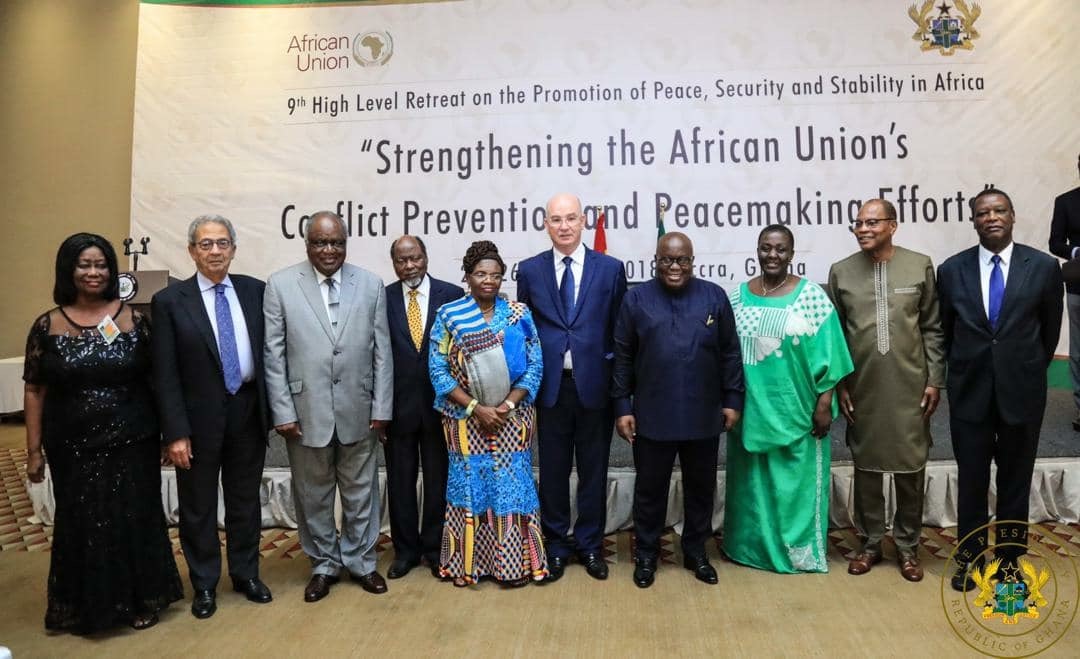 The President, Nana Addo Dankwa Akufo-Addo, says the objective of an integrated Africa cannot be achieved without peace and stability on the continent.

“Efforts at integration of the continent will be negatively affected if African countries continue to battle with the human security challenges which confront their peoples. No country would want to integrate with another whose house is on fire”, he said

President Akufo-Addo made this known on Thursday, 25th October, 2018, when he addressed a High-Level African Union Retreat on the “Promotion of Peace, Security and Stability in Africa”, at the Movenpick Hotel, Accra.

History, he added, teaches us that Austria, Britain, France, Germany and Italy had for centuries waged wars over religion, territory and power.

“The creation of a free market, concealing economic and geographical borders, was intended to erode the justification for using war as the quickest avenue to wealth and power, and lessen its appeal. That was the vision that underlay the idea behind the European Economic Community, now the EU, in 1957,” the President said.

The President continued, “This should motivate us in Africa, and hasten our efforts towards integration. If Europe, through the formation of the EU, was able to stop the vicious cycle of violence that had plagued them for centuries, leading them onto the path of advancement, wealth and prosperity for the majority of their peoples, Africa can no longer dither.”

He urged African leaders to work together to unleash the energy and ingenuity of the African, and also “work towards the day when all of us will look to doing business first in our region and continent before looking to Europe, Asia or the Americas, because we have the men and women, the goods, the services and the quality.”

President Akufo-Addo further urged African leaders to recognize that the way forward is to implement regional and continental decisions, such as the Continental Free Trade Area Agreement, as, ultimately, the benefits are in everyone’s interest.

“Those of us who believe strongly in integration can do no better than to give our full support to regional and continental decisions. Through this, we will build institutional confidence and integrity in the structural organs of the AU and our regional entities,” he added.

To the AU Envoys and the participants at the retreat, President Akufo-Addo urged them also to focus on the creation of conditions for the elimination of pervasive threats to peoples and individual rights, livelihoods, safety and life, through the protection of human and democratic rights, and the promotion of human development.

With over 50% of Africa’s population under the age of 20, the President noted that African countries must create opportunities and jobs for our youth, or they risk becoming instruments of instability or targets of recruitment by terrorists.

“We must provide them with access to education; we must transform the structure of our economies from raw material producing and exporting economies to value-added and industrialised economies, which will provide opportunities, jobs and hope to our young people to live dignified, productive lives,” he added.

Equally critical, the President added, is the promotion and development, on the continent, of a system and culture of accountable governance, free of corruption, whereby the African peoples are governed in accordance with the rule of law, respect for individual liberties and human rights, and the principles of democratic accountability.

“Such a system includes building strong institutions of state, such as well-resourced Parliaments and Judiciaries, efficient law enforcement agencies, and effective security forces, that see their responsibilities and allegiances to the wider public interest, not just to the conveniences of the governments of the day,” President Akufo-Addo emphasised.