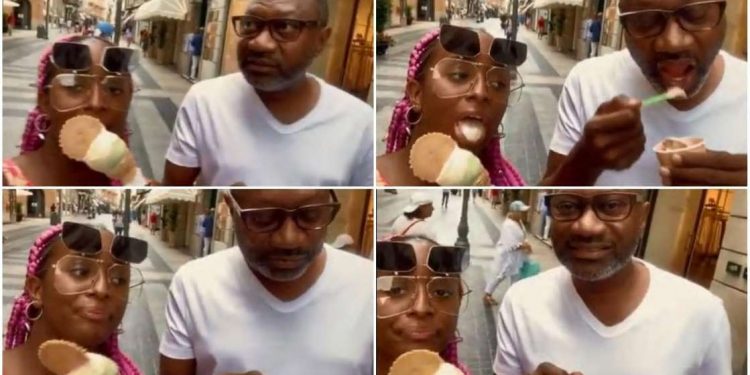 Femi Otedola and family visited Italy for one hour to buy ice-cream.

The billionaire businessman, Femi Otedola and his three daughters, Tolani, Temi and Ifeoluwa (DJ Cuppy), shared snaps from their fun holiday as they visited Monaco.

However, the very influential family took a break from Monaco as they visited Italy just for an hour to buy ice cream.

DJ Cuppy took to her social media pages to share a cute video of herself with her dad on the street of Italy as they revealed that they only visited for an hour to have some gelato.

Well, a very large number of Nigerians are not used to this type of luxury as many prayed to God to bless them and punish poverty while others made jokes from the situation.

The Otedolas are no stranger to going on holidays that a troll even questioned the billionaire businessman about his constant vacations.

Otedola recently shared a photo on his Instagram page, revealing he was just starting his 6-week summer vacation in London.

A troll then said the businessman always goes on vacation and even asked if he ever goes to work.

Otedola’s classy response to the troll left social media users in a frenzy.

“As an entrepreneur, my role is to ensure that I hire a competent team to run my business affairs without my physical presence and of course one that outlives me,” he said.

“Mine is to nuture the team to maximize shareholder value,” he added.