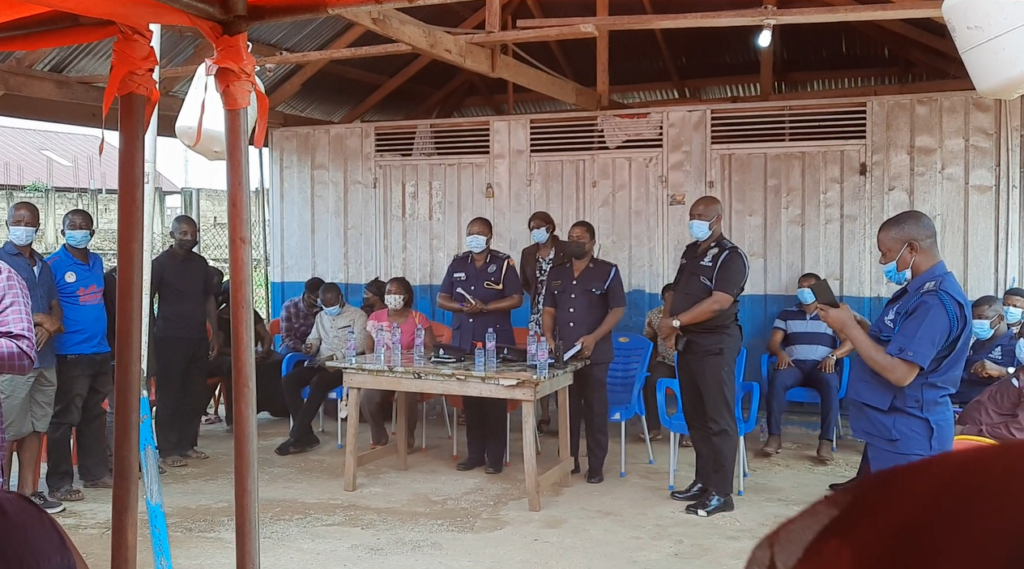 A team of clinical psychologists from the counselling unit of the Ghana Police Service headquarters on Wednesday had sessions for the families whose relatives were murdered at Abesim in the Sunyani municipality of the Bono Region.

The exercise, directed by the acting Inspector General of Police (IGP), Dr. George Akuffo Dampare, aimed at reducing the trauma of the affected families.

Aside from the affected relatives, the team will also provide trauma-reduction therapy to the community and the Police officers in charge of the investigations.

The team which arrived in Sunyani on Tuesday, August 24, 2021, visited the family of Louis Agyemang, and Stephen Sarpong, and held separate counselling sessions for them at Abesim and Alaska, and a private session for the parents, siblings, and some key immediate family members.

“We have been able to manage and give them some trauma reducing therapy in addition to the debriefing and grieving processes”, she said.

She further said they also engaged members of the community, who have been gripped with fear and panic.

“We have been able to address their concerns. We have provided them some healing on the emotional issues that gripped them, and from the experience they have shared with us, they are better off than they came”, she explained.

The director of the police counselling unit said the progress made is a plus for the Acting IGP and the police administration since it’s a novelty.

ACP Phyllis Osei revealed that a six-member team from the Bono Regional branch of the Ghana Psychological Association, who have been with them throughout, will continue to provide social support and psychological interventions to the family before, during, and after the burial of their relations.

The counselling session also afforded members of the community an opportunity to share their concerns with the police officers.

Duration of investigations, security in the community, poor visibility, and identified crime-prone areas are some of the concerns raised.

They appealed to the police to see the outcome of the investigation as a means of restoring public confidence and urged them to do diligent work regardless of who may be involved.

Meanwhile, the police investigators continue to discover fresh evidence in connection with the gruesome killings since the visit of the acting IGP on Sunday.

The Criminal Investigation Department (CID), Headquarters team on Tuesday, August 24, 2021, discovered a place where the prime suspect Richard Appiah buried the intestines of one of the murdered victims.

A statement signed by the Acting Director-General, Public Affairs, ACP Kwasi Ofori, said “the intestines were buried in a cocoa farm at Abesim, which the Police have since exhumed for pathological analysis and forensic examination in Accra”.

It added that “The investigation team has also worked around a septic tank and other places of concern for further examinations. Two sharp cutlasses with bloodstains used by the suspect to commit the crime were retrieved from the scene”.

The Police Administration, however, assured the public, especially the affected families and the people of Abesim of a thorough investigation to bring the perpetrators to justice.

28-year-old Richard Appiah was arrested on Saturday, August 21, 2021, after the body parts of a 15-year-old JHS 2 student, Stephen Sarpong were found in a double door fridge in his apartment.

Further search of his room also revealed the lifeless body of his 12-year-old step-brother, Louis Agyemang, and another yet to be identified body.

Already, the Police has announced the arrest of an unnamed second suspect in connection with the murders.