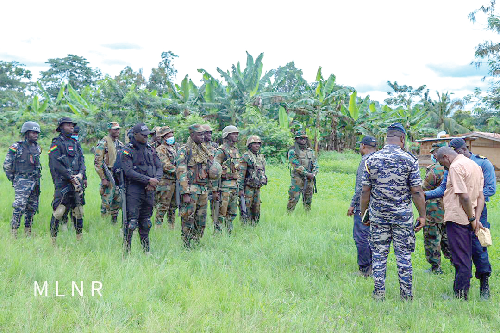 Seven persons, comprising two Ghanaians and five foreigners, still neck-deep in illegal mining activities in the New Abirem District in the Eastern Region have been arrested.

They were arrested yesterday when a Deputy Minister of Lands and Natural Resources, Mr George Mireku Duker, led a special operation, made up of military and policemen, to clamp down on illegal mining activities, popularly called ‘galamsey’, in the area

The special operation followed several distress calls from local people in mining communities to the Ministry of Lands and Natural Resources about the destructive activities of illegal miners.

According to the deputy minister, the arrested galamsey operators would be duly prosecuted, using the new mining law, to send a strong signal to others.

Sanctions for illegal small-scale mining under the Minerals and Mining Act (Act 995) prescribe a jail sentence of 15 years minimum and 25 years maximum for offenders.

The resurgence of galamsey in the Eastern Region came just two weeks after the Minister of Lands and Natural Resources, Mr Samuel Abu Jinapor, had expressed his excitement at the clearing up of the Tano and the Bia rivers in the Western North Region, a development that indicated that illegal mining activities had gone down.

Mr Duker, who was disappointed at the extent of devastation caused by galamsey activities in the Eastern Region, warned that all persons who were still adamant to stop the illegality would be flushed out and made to face the full rigours of the law.

“It is unfortunate that people are still recalcitrant and not listening to calls to stop galamsey. The more worrying part is that there is an invasion of foreigners, which is now the new trend.

“People from Burkina Faso, Togo, Cote d’Ivoire and Benin are involved in this; and it is disheartening that Ghanaians are allowing this to happen. Animals are dying because they drink from diverted water that has been polluted by mercury,” he said.

Mr Duker further observed that it was unacceptable for a few people to keep destroying cocoa farms, all in the name of illegal mining.

At the galamsey sites in the New Abirem District, it was observed that the illegal miners had diverted the course of the Pra River to aid in their operations.

Although the government has banned the local manufacture of Chanfang machines used in destroying water bodies, more than 20 of them were being used for the galamsey activities.

They were, however, seized and burnt by security personnel.

Mr Duker called on residents of local communities to get involved in the fight against illegal mining by promptly giving out information on galamsey.

“The Pra River is heavily polluted and Ghanaians must be worried and get involved to fight this menace. We cannot fight it alone; it is not an event. All hands must be on deck,” he urged.

He observed that it would cost the country a lot in the future if sustained efforts were not made to deal with the galamsey menace.