Seven persons, made up of three students, two teachers and two administrators, have been convicted of impersonation in the 2020 West Africa Secondary School Certificate Examination (WASSCE) by the Agona Swedru Magistrate Court.

One of them received custodial sentence while the rest were fined.

They included Georgina Danso, Desmond Oduro and David Bawah, all Form Two students of the Ngleshie Amanfrom SHS in the Greater Accra Region, who were fined GH¢1,200 each and barred from taking part in any WASSCE for three years.

Richard Nkrumah, alias Emperor, a teacher at Ngleshie Amanfrom SHS, who doubles as the Assistant Headmaster of Central High School, was sentenced to six months imprisonment.

The convicts initially pleaded not guilty to the charges of impersonation and abetment to commit crime to wit impersonation but they were found guilty at the end of the trial and accordingly sentenced by the court on Wednesday, July 21, 2021.

Before passing judgment, the magistrate, Mr Isaac Apeatu, said what the convicts did was wrong and that their conviction was to serve as a deterrent to others who might plan engaging in similar acts.

The facts of the case as presented by Inspector Chare N. Salia were that on Monday, August 17, 2020, when the final year SHS students were writing the WASSCE, a team of West African Examinations Council (WAEC) officials, led by Mr George Agyekum, the complainant, were going round the various SHSs within Agona Swedru and its environs to check the conduct of the examination.

Inspector Salia said they were arrested and during interrogation Ahmed, Sarfo, Bawah, Danso and Oduro stated that it was Richard Nkrumah and Cedric Sefah Akyeampong who contracted them to impersonate Huntor Savior, Tetteh-Courtnay Clinton Larry, John Faati, Odamatey Father Justice Nii Laryea and Coffie Boakye Nana Yaw to write the WASSCE Core subjects for them.

The prosecutor stated that on August 20, 2020, Nkrumah and Sefah Acheampong who were at large were arrested and they admitted to the offence in their caution statement. 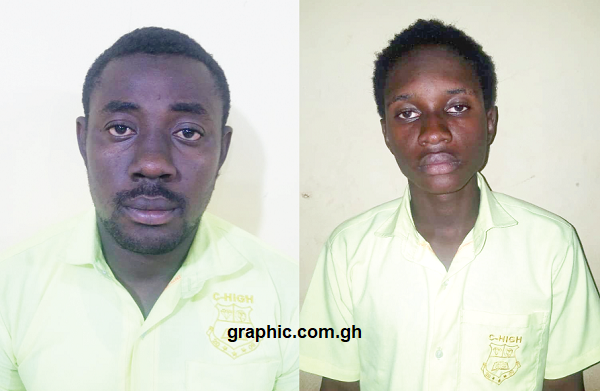