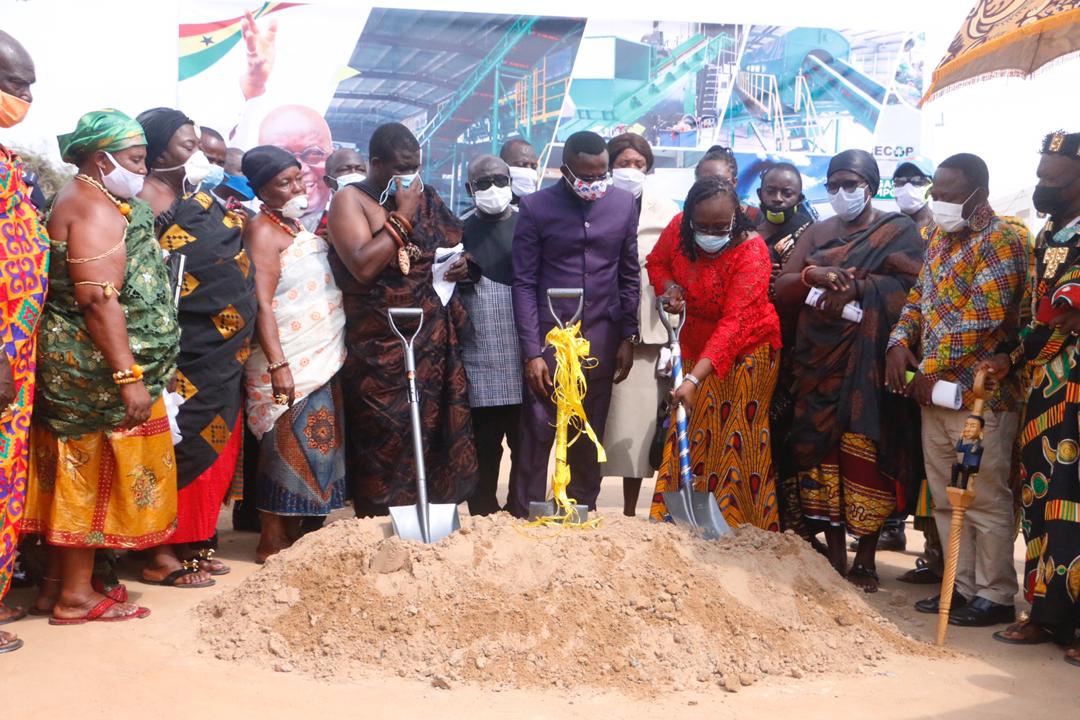 It was all joy for the people of Central Region as the sod was cut for the construction of the Central regional solid waste treatment plant.

Addressing the gathering at the sod-cutting ceremony on Friday (November 20, 2020,) at Mankessim in the Mfantseman Municipality of the Central Region, the Central Regional Minister, Mr Kwamena Duncan, stressed that the integrated recycling and composting plant formed part of President Nana Addo Dankwa Akufo-Addo’s quest to make Ghana the cleanest country in Africa.

He stressed that the President was very committed to ensuring good sanitation in the country which reason he said the President, through the ministry of sanitation of water resources (MSWR) evacuated heaped aged dumpsites in the region a few weeks ago.

He, therefore, praised the President and Zoomlion Ghana Limited for the project while also commending the Chief of Mankesim, Nana Krampa VI, for making available a 100-acre land for the solid waste treatment plant.

The Sanitation and Water Resources Minister, who was represented by Mr Kweku Quansah, disclosed that only 65 per cent of waste generation were properly disposed of in the country.

“So what happens to the 35% uncollected? That goes into our gutters causing flooding. That is why we need such facilities to process them into renewable use,” he said.

He was delighted at the project, stating that “we are very excited that in the next few months this project will be operational.”

He used that chance to appeal to the people of Central Region to shun the habit of littering around.

“That goes into our gutters causing flooding that is why we need such facilities,” he indicated.

The deputy Managing Director of Zoomlion, Madam Gloria Anti, said the state-of-the-art facility, when completed will provide sustainable solid waste management solutions in the country.
She commended President Akufo-Addo for his vision and commitment towards ensuring that development was equitably distributed in the country.

“His commitment and dedication to ensuring a clean Ghana is very much appreciated. We as the leading waste management company in Ghana and other parts of Africa will continue to contribute our quota to make his vision for this sector a reality,” she said.
“We at Zoomlion are committed to making sure we partner government for Ghana to become clean,” she said.
According to her, the facility is a 400-ton waste treatment facility equipped with 21st century technologies in sanitation management and it aims to provide a sustainable solution to recover and recycle over 60% of the organic fraction of the waste into compost to boost the agricultural sector and support the Planting for Food and Jobs Agenda. Other recyclable materials will also be separated and processed for reuse.
Further, Mrs Anti revealed that Central Region generates about 990,00 waste annually, most of which goes into landfills making it hazardous to the citizenry, indicating that the facility has the potential of curbing this.
She went on to add that when completed, “the project will create 250 indirect and 75 direct jobs respectively.
For his part, the acting President of Mankessim Traditional Council, Okumanyin Adoko, expressed his commitment towards supporting the project to succeed.
It was his hope that the project will create jobs for the youth in the area to help mitigate the unemployment challenges amongst the youth.
The project is a collaboration between government and Zoomlion Ghana Limited and its partners, Komptech.