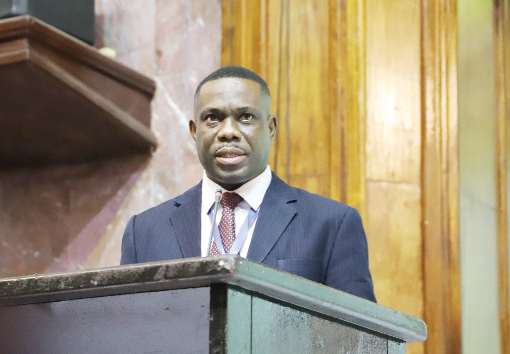 Three personalities in the built environment and local governance have strongly given their support to the call for the country to have a new administrative capital.

They have, therefore, called on duty bearers to take a bold decision to initiative plans for the relocation of the capital city from Accra to another part of the country.

They agree that the move is not only necessary to deal with the congestion, over-population and flooding in Accra but also open up the country for further development, economic prospects, job creation, among other things.

They have called for stakeholder consultations to decide on the most suitable place for the relocation of the capital.

The Omanhene of the Agogo Traditional Area in the Ashanti Region, Nana Kwame Akuoko Sarpong, last week re-ignited the debate on the need to relocate the capital city from Accra.

“It is time for the government to take bold steps at creating a new administrative capital for the country to solve the chronic congestion and related development challenges Accra has been subjected to and which make the future even more daunting,” he had told the Daily Graphic.

His call came on the back of a similar suggestion on January 10, 2018 by a consulting engineer and city planner, Prof. Nii Odartei Mills, who cited the poor state of the national capital as basis for his call.

Although he did not name any particular place for development into a new national capital, he argued that poor planning, indiscipline and congestion in Accra were enough bases to have a new befitting capital.

Dr Osae, Rev. Prof. Adams and Dr Amaglo agreed virtually with all the arguments espoused for the relocation of the capital city from Accra.

Dr Osae said it was about time the country took the bull by the horns to relocate the capital, saying that in all other countries where the capital city was over-populated and very congested, one of the ways to deal with that was to relocate it to another place.

“We are going to do the National Population and Housing Census and we can have very good, empirical and evidential bases to support that particular agenda. But my caution is that we should not politicise it because if we do that, we will fail.

“What we can do is have a National Capital Development Law that will be documented, and once Parliament passes it into law, it will stand the test of time,” he said.

Dr Osae added that within the law, the country could have a short to medium and long-term strategy towards relocating the national capital to another area, where it could have a large land size to facilitate expansion and government businesses being located at one place.

Dr Osae, who is also the Director-General of the Internal Audit Agency, said at the moment, the central business district of Accra was over-populated and very congested.

Asked about the next appropriate location, he said the issue of Dodowa, with its large tract of land, could be revisited, although there were other areas that could be considered as well.

However, he said, the capital should not be located in the middle of the country, as that would make it landlocked and affect administration.

“I think we have enough land in this country, except that it should be closer to the sea, so that it will facilitate effective business transactions,” he added.

Dr Osae said security wise, it was dangerous to have all government businesses in one location “because if the country is attacked, we are doomed”.

“Security wise, we may also decide to spread out some of our sensitive national installations and national offices to other places, so that it will be difficult for people who want to attack the country to attack all of them at a go. So we have to think through it and develop short, medium to long-term goals,” he said.

Rev. Prof. Adams noted that Accra, which was not well planned, had sprawled beyond what could be easily re-engineered into a decent city, saying: “On that score, I would say that Ghana should be thinking of building a more model city that will be the future capital of the country.”

He said apart from the unplanned nature of Accra and the congestion, factors such as flooding and Accra being prone to earthquakes made it imperative for the relocation of the capital city.

Re-engineering Accra into a decent place, the GhIE President said, would require the demolition of a lot of structures and the payment of huge amounts in compensation, which the government would have to bear.

“Accra cannot be the future of Ghana because Ghana is the host of the secretariat of the African Continental Free Trade Area (AfCFTA) and all the other things that we boast of for being the gateway to Africa. If you look at the city, I don’t think it is befitting of a gateway to Africa,” he said.

Moreover, Rev. Prof. Adams said, apart from the sea, all the inland water bodies had been messed up completely, while the waste system was also not working effectively, all because of the lack of proper planning.

Again, he said, in Accra, industrial enclaves had been mixed with residential settlements.

“The city has been allowed to grow on its own. The city authorities make plans that cannot be implemented because the city has been built already. So we have people who go to work to try to plan but there is nothing they can plan and implement.

“You don’t own the lands, they are for people; so what can you do? Look at the road network in Accra — everything is in a complete mess,” Rev. Prof. Adams pointed out.

Another reason for the creation of a new city, Rev. Prof. Adams said, was the generation of jobs for the unemployed.

“For a country owing a lot of money and not able to create wealth for its people, building a new city will mean creating more jobs. This can trigger other investments in the country.

“We may not have all the money, but it does not also mean that we should not dream. Our dream cannot be Accra as it is; if Accra is the dream, then we are doomed,” he said.

In terms of a suitable place, he suggested that there should be broad-based consultations across the political divide, taking into consideration a number of factors.

“I would rather we determined what was needful and the key priorities and how that would help the whole country,” he said.

He said the engineers institution was ready to make inputs into plans to set up a new city.

For his part, Dr Amaglo said the idea of having a new capital was laudable and of a necessity, and that there was the need to do a thorough job about what would go into the implementation of such a decision.

“It is a laudable idea because if you see the present situation in Accra, it is not the best. There’s congestion all over the place, with people trading anywhere and vehicles picking and dropping  passengers anywhere,” he observed.

The Surveyors President said building a new capital, well planned with good layouts, would help open up the country for businesses and job opportunities.

Dr Amaglo said with good planning and layout, problems such as flooding, among other things, could be dealt with anytime it rained.

“The roads, alignments and other things should also be taken into consideration. My only worry is how it will be implemented; if there won’t be cutting of corners,” he said.

He, however, indicated that before such a decision was taken, there was the need for consultations across the country for inputs from various stakeholders in order to have a generally acceptable plan for what the new city would look like.

Dr Amaglo also suggested that the plan should go beyond a few stakeholders coming together to do that and rather called for a national consultation to discuss the nitty gritty.

The conversation should cover full disclosure on where funding would come from, the location, reasons for the selection of location and so on, making it a long-term plan, he said.

Again, the Institution of Surveyors, its President said, was ready to support in that direction by drawing on the expertise of its members across the country.

“We have what it takes to help build a new city. If the institution is called upon, we have our expertise and are ready to offer it for the national good. From the three institutions that we have …we should be at the centre of activities to give advice on how to approach this thing,” Dr Amaglo stated.

Asked where he thought would be a suitable place, the President of the Institution of Surveyors said that should be left to the various stakeholders, professionals and technocrats who would be brought together during the consultations.