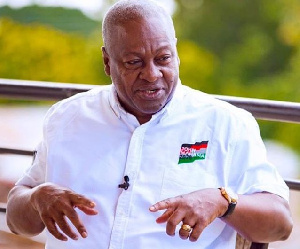 According to him, this forms part of the numerous intervention programmes which the NDC plans to put in place to develop Zongos and deprived communities when he takes over the governance of this nation in 2021.

In an interview on Woezor TV monitored by GhanaNewsPage.Com, John Mahama said the mortuaries will help preserve the dead in Zongo areas.

Mr. Mahama today, Sunday, September 20, 2020, just ended his tour in the Bono East region ahead of the December polls.

Accessing his tour of the region, he spoke on his track record regarding infrastructure as well as his enstoolment as Nkosuohene (Development Chief) at Apesika and other Traditional areas in the Bono East Region.

Mr. Mahama lamented about the failure of his successor, President Nana Akufo-Addo’s administration to continue infrastructural projects he started during his tenure.

Among other things, the NDC Flagbearer has promised chiefs he will bring better developments in the traditional areas and admonished them to back him to unseat the NPP government.