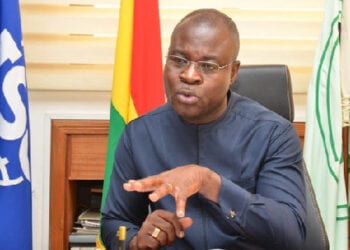 The Ghana Standards Authority (GSA) has engaged the services of 200 trainees of the Nation Builders Corps (NABCO) to help ensure that imported goods and those manufactured in the country meet acceptable standards.

Known as the Trading Standards Officers (TSOs), they have been drafted in to conduct market surveillance and other activities to weed out fake brands and inject sanity in the trading of goods in the country.

The Director-General of the GSA, Professor Alex Dodoo, told the Daily Graphic in an interview on March 21, 2022, that contract letters had been issued to the appointed officers to commence work.

The TSOs, he said, would conduct routine checks or investigate complaints on local traders and businesses.

“For example, they will take samples of goods for testing, check the accuracy of weighing scales and measures, such as for beer and spirits in pubs and clubs and make sure labelling is correct and advertising is not misleading,” he said.

Beyond their activities to rid the market of substandard goods, the TSOs will also advise consumers and businesses on the laws and regulations in relation to standards and investigate suspected offences through undercover or surveillance work as well as prepare evidence for prosecution.

He said the appointment of the TSOs, which is on contract basis, was also in line with the GSA’s enforcement drive.

The weak standards enforcement regime in the past allowed the dumping of substandard goods and services on the local market, thereby putting the health and safety of consumers and properties at risk.

In response to that, the GSA in 2021 declared rigorous enforcement of the Standards Act, 1973 (NRCD 173) to bring order in the public space, create jobs, generate revenue for the state and ensure discipline in society.

However, Prof. Dodoo said the lack of identifiable enforcement officers in the past slowed down the GSA’s enforcement drive.

Standards cover a huge range of activities. There are standards that describe the best scientifically accepted ways to do something in a specific jurisdiction. These include manufacturing a product, managing a process or delivering a service.

In Ghana, the GSA is mandated under NRCD 173 to undertake conformity assessment activities and give permission for a conforming product to bear a mark of conformity called the ‘Standard Mark’ as proof of evidence of compliance with a specification.

This means that manufacturers or importers of products to be used in the country are by law required to get them examined and certified by the GSA to ensure that they conform to the country’s standards, after which a certificate is issued.

There are regulatory agencies in the country that are also legally mandated to ensure that manufacturers and importers comply with the standards in the country, as developed by the GSA.

For instance, the Food and Drugs Authority and the National Petroleum Authority are legally responsible for regulating operations in their sectors, including the enforcement of the approved standards.