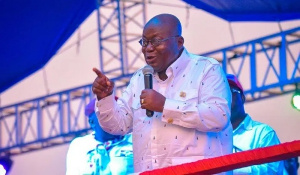 President Nana Addo Dankwa Akufo-Addo has urged all Ghanaians to vote for him and the New Patriotic Party (NPP) in this year’s presidential and parliamentary elections to enable his government continue the development of the country.

He said projects such as the One District One Factory (1D1F) initiative and the ongoing road projects, are likely to be truncated if the NPP does not win the elections hence, the need to vote for the governing party to complete all the factories being established.

Speaking during the unveiling of the ‘Nana-Bawumia’ ticket by the NPP for this year’s elections, on Saturday June 27, Mr Akufo-Addo said : “We have to win the elections to see our major projects through to conclusion. We dare not leave the many factories coming up under our 1D1F scheme, to be truncated.

“We dare not leave our roads to go unattended again, only to become part of the ‘Green Book’ propaganda. We dare not jeopardize the digitization schedule on which we have embarked.”

Mr Akufo- Addo further told the gathering that governments of the NPP always develop the local economy while those of the National Democratic Congress (NDC) destroy it.

To that end, he reiterated his call on Ghanaians to vote massively for him and the NPP in this year’s polls in order to take the development if the economy to another level.

said : “We grow the economy they shrink the economy, we create the properly regulated enabling atmosphere for businesses to flourish, they allow chancers, speculators to lure citizens into putting their moneys into dodgy enterprises.

“They bring our banks and financial sectors to near collapse, we have to clean up, shore up and restore confidence, they plunge us into dumso, we keep the lights on.”

For his part, Vice President Dr Mahamudu Bawmuia, noted that petroleum prices have increased under the Akufo-Addo administration by half of the rate that occurred under the NDC under the leadership of Mr John Mahama.

He said the New Patriotic Party (NPP) administration has better managed the economy including the petroleum sector, than what Ghanaians experienced previously.

Speaking during the event, he said : “They (NDC) should not only read the data but they should try and understand it so that they don’t mislead Ghanaians like their general mosquito tried to do on the Supreme Court verdict on Thursday.

“If they study the data they will realize that for our first term in office, we have not just performed better but we have performed overwhelmingly better across board.

“Any claim to better management of the economy must ultimately reflect in the lives of the people .

“How have we been able to reduce the sufferings of our people and make life easier for them after three and half years in office?

“ That is exactly what President Nana Akufo-Addo has done. We have ended the sufferings associated with dumsor, we have reduced electricity tariffs by 10.9% compared to a cumulative increase of 264% under the NDC.

“We have further reduced tariffs by 50% for the months of April May and June this year.

“We have provided free water for households in April, May and June, petroleum prices have increased by half the rate that they did under the NDC. We have doubled the capitation grant, established NABCo, created jobs and stopped the freeze on recruitment in the public sector.”