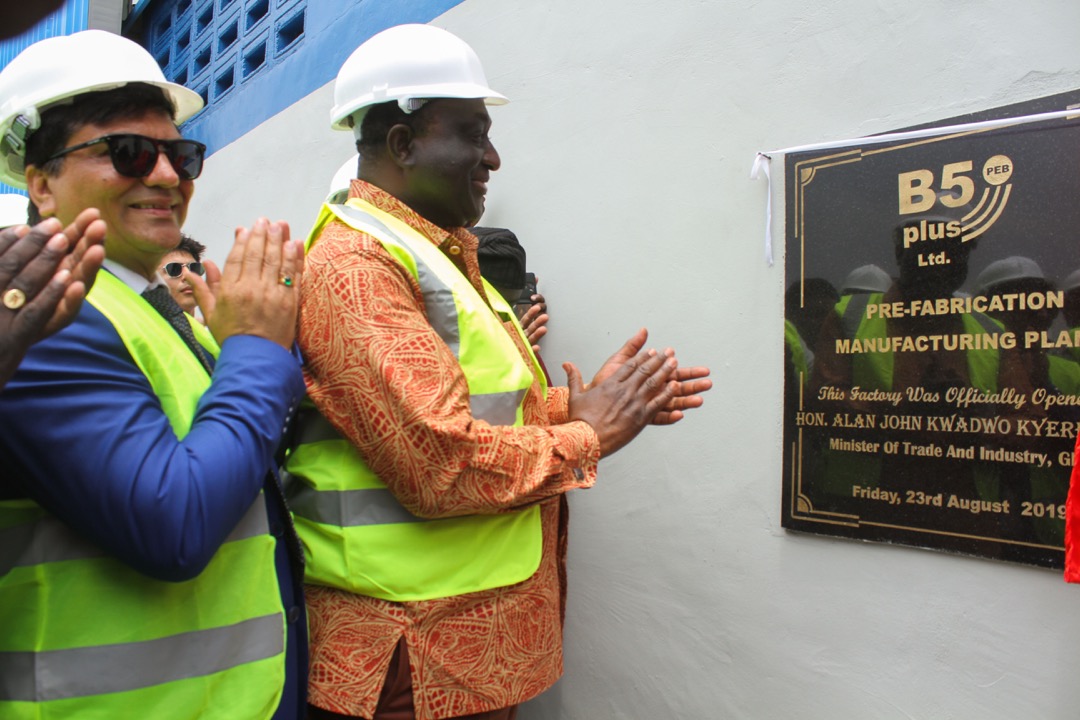 The first phase of an $80 million three pre-fabrication manufacturing plant established by B5 Plus Group in Dawhenya in the Greater Accra Region has been inaugurated and has started production.

The project, which is under the ‘One District, One Factory’ (1D1F) initiative, will produce various forms of metal and metal-related products for both local and international markets.

The factory, when fully completed, will be one of the largest state of-the-art steel manufacturing plants in Africa, with production capacity of 25,000 metric tonnes per month. 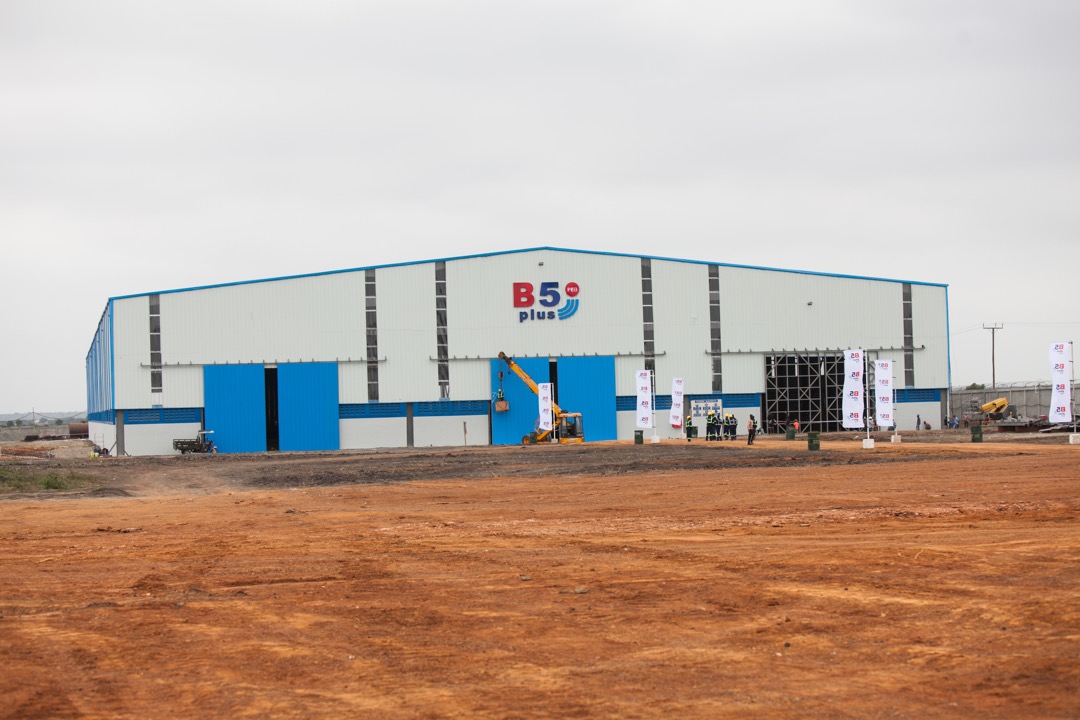 When fully operational, the company will create about 10,000 direct and indirect jobs for the people of the community and its environs.

Mr Mike Mukesh Thakwani, the chairman of B5 Plus Group, commended government for creating the enabling environment for private businesses to thrive.

He urged government to ban the importation of steel materials into the country as the company was capable of supplying the country and beyond with quality products.

“By giving distribution network to more than 1,000 companies in Ghana, we are not only helping them to grow their businesses, but we are also giving them a credit facility,” he added.

“With this factor, it will save Ghana $100 million in foreign exchange in the first year,” Mr Thakwani stated. 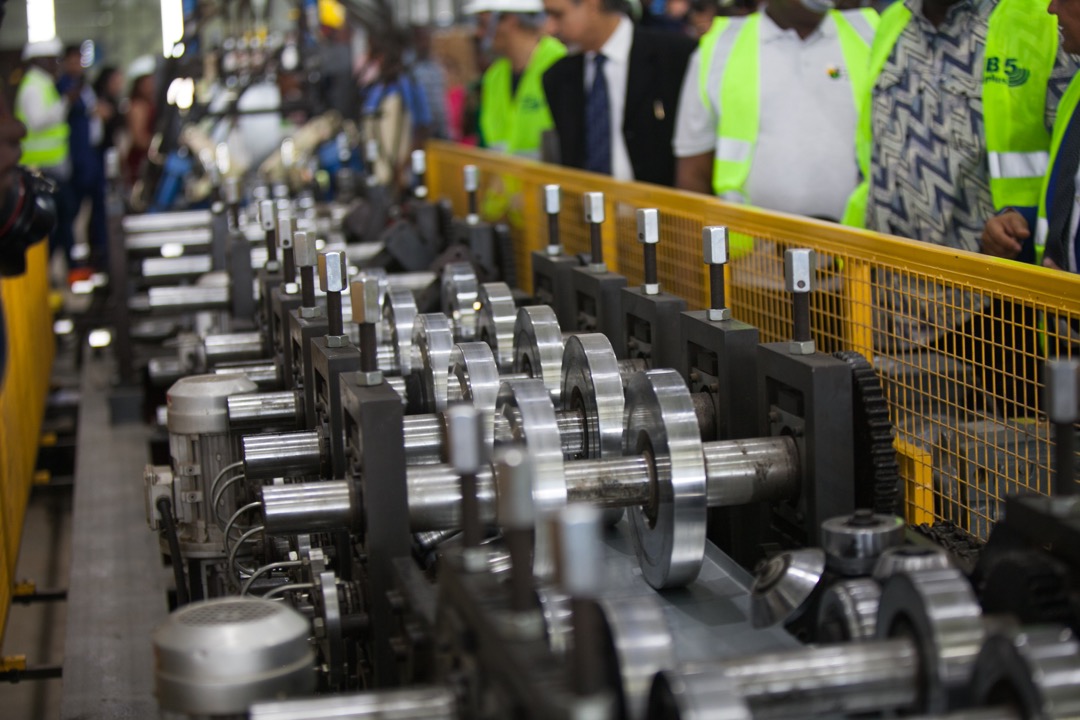 He said the company, as part of its corporate social responsibility initiatives, organised a blood donation and health screening exercise, and also supported in education to give back to the community in which it operated.

Inaugurating the factory, the Minister of Trade and Industry, Mr Alan Kyerematen, said the company, which produced various metal products and served as inputs for the downstream metal fabrication and construction industries, had a strong presence in the ECOWAS market, exporting to Togo, Burkina Faso, Niger, Nigeria, Benin, Sierra Leone, Liberia and Mali.

He encouraged the management of B5 Plus to take advantage of the Continental Free Trade Area to export their products to other regional markets outside of ECOWAS.

“The private sector will continue to remain at the centre stage of the government’s economic transformational agenda as we develop mutual partnerships towards the realisation of the hopes and aspirations of Ghanaians in building Ghana beyond aid,” he added.

He said the plant was another significant achievement of the Industrial Transformation Programme of government, which was aimed at transforming the structure of the country’s economy from exporter of raw materials to trading in value-added products.

He noted that efforts made towards industrial development in the country after independence had not yielded the desired results, partly because the industrialisation programmes in the past focused on the extraction of minerals and the production of raw materials for export.

He said it was part of the reason why President Akufo-Addo initiated the ‘One District, One Factory’, and industrial revitalisation with stimulus package to lead the path of rapid industrialisation in the country.

“It is for this reason that the Government of Ghana played a leading role in the design of and eventual achievement of the African Continental Free Trade Area Agreement.”

He said 54 out of the 55 countries on the African continent had signed and ratified the agreement, which signified the commitment on the part of African countries to trade among themselves.

It is a single market (duty-free, quota-free) covering the entire African continent, with a total population of 1.2 billion and a combined Gross Domestic Product of almost $3 trillion.

The agreement is the world’s largest Free Trade Area, second only to the World Trade Organisation in terms of the number of member states.