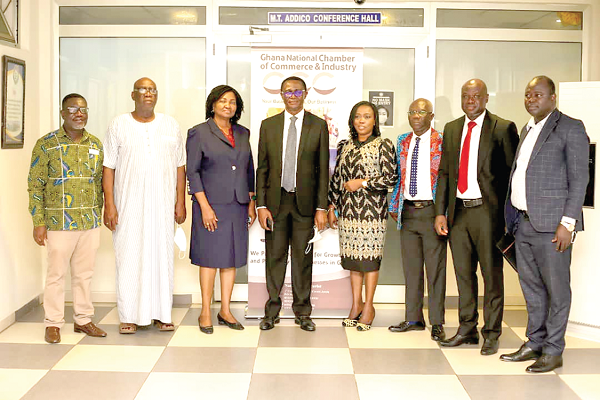 About 14 million people have been identified as eligible taxpayers after a successful integration of the Ghana Card and Tax Identification Numbers (TINs), an exercise which started on April 1, this year.

The Commissioner-General of the Ghana Revenue Authority (GRA), Mr Ammishaddai Owusu-Amoah, who made this known, said out of the number, only six million filed their annual tax returns, leaving the majority, who included lawyers, medical personnel, engineers and accountants not complying with the country’s tax laws.

Further analyses of the data, he stated, also showed that culprits of the anomaly were mostly people between 35 and 65 years old and residing mostly in the top 10 affluent communities of the country.

Mr Owusu-Amoah was speaking at a forum organised by the Ghana National Chamber of Commerce and Industry (GNCCI) in Accra yesterday.

The forum, dubbed “Time with the Commissioner-General of the Ghana Revenue Authority (GRA), created a platform for members of the chamber, captains of industry and members of the business community to interact with Mr Owusu-Amoah.

It also addressed key issues affecting businesses as well as sensitised the business community to tax administration and its implications.

Compliance with the law

Mr Owusu-Amoah said the authority was putting in place the needed steps to ensure that all taxpayers captured in the tax bracket complied with the law.

“With our current database, we have people who are above the age of 35 years and those below the age of 65 who reside at the top 10 affluent communities in the country such as Labone, East Legon and Cantonments and yet they do not file their annual tax returns.

“Fortunately for us we have their contacts, GPRS address and their locations and so we will encourage people to voluntarily comply with the law,” he said.

With the culprits, the Commissioner-General said the GRA did not have any evidence that they had filed their tax returns and that there were two things involved in this situation; “it could be that some of them are paying the PAYE (Pay As You Earn) but have not filed their returns.”

“And so it does not necessarily mean that they are not paying their taxes but rather they may have paid and have not filed them individually. In such a situation, the person needs to be engaged to ascertain the reason,” he explained.

The Commissioner-General said analysis of the data from the integration exercise was still ongoing and included the age, profession and residential profile of the people that qualified to contribute to the country’s tax basket.

Mr Owusu-Amoah urged Ghanaians who had not filed their tax returns to take advantage of the government’s penalty and interest waiver regime.

The regime involves waiving the penalty and the accrued interest on tax arrears for both corporate and individual taxpayers as a motivation for them to regularise their tax obligations.

It took effect from April this year and allowed people and institutions that had either not registered with the GRA or breached the tax payment and the filing of returns schedules to apply to the authority for waivers.

Mr Owusu-Amoah said the move was to help cushion businesses and people against the COVID-19 pandemic.

The First Vice-President of GNCCI, Mrs Victoria Hajar, said the chamber recognised and appreciated the long-standing relations with the GRA.

She said in the early 2000s, the chamber’s advocacy saw a marked reduction in the corporate tax rate from 32.5 per cent to 25 per cent after much engagement with the GRA and other stakeholders.

Mrs Hajar added that the GRA’s cooperation in implementing the recommendations of the chamber’s advocacy on streamlining the duty drawback process was also commendable.

There was no gainsaying that it was the private sector that paid taxes and not the government and as such to improve tax administration would require regular engagement with private sector players, Mr Hajar stated.