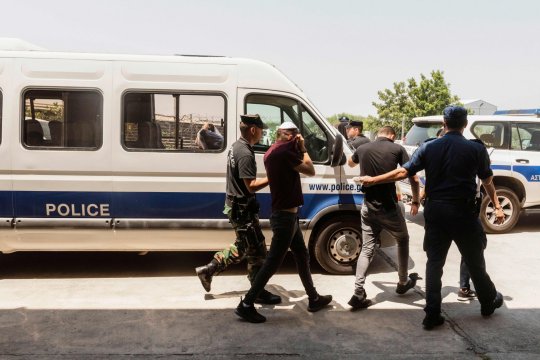 A British teenager who said she had been raped by a group of men in Ayia Napa will appear in court on suspicion of making a false allegation, police said.

All 12 suspects who were arrested on suspicion of rape as a result of the allegation have been released by police in Cyprus.

The woman, 19, who accused them of gang rape will appear in court tomorrow, police said. Police spokesman Christos Andreou told AFP the remaining seven suspects were taken out of custody today at 10am after the first five were released earlier this week. None of the men – all Israeli tourists – were charged. Mr Andreou said: ‘The young woman will be taken to court tomorrow morning (Monday).’

Earlier, a police source said the British teenager had been arrested. They said: ‘She is facing charges of giving a false statement over an imaginary offence.’ Initially, the woman had alleged that 12 men gang raped her at the Pambos Napa hotel where she was staying in the popular tourist resort on July 17.

The suspects – whose ages ranged from 15 to 18 – were remanded in custody the next day. Hours before their second appearance in court five of them were released and sent home late on Thursday. The remaining seven had their remand order renewed for another six days on Friday.

Both hearings took place behind closed doors because of the age of some of the suspects. All 12 denied rape. Cyprus-based Israeli lawyer Yaniv Habari, who represented one of the suspects said: ‘The complainant apparently changed her version, and based on that the investigator decided to release the seven.’ Around 1.3 million British people travel to Cyprus every year.