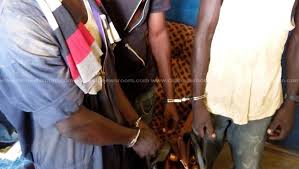 Police in the Savannah Region have arrested twelve persons for almost lynching a 70 year old woman they labeled as a witch.

BestNewsGH.com is informed that the woman who is a resident of Gyentilipe in the Sawla-Tuna-Kalba District of the Savannah Region was accused of being a witch and narrowly escaped being killed after the police arrived at the scene on time to stop the mob action.

Armed with stones, sticks and other weapons, the mob tied the old lady to the ground and was about lynching her when the police arrived at the scene.

Visibly angry at the police intervention, BestNewsGH.com sources said the irate youth transferred their aggression and anger onto the police personnel, pelting them with stones in the process.

ASP Degraft Amarh Adjei, the Sawla-Tuna-Kalba District Police Commander, confirming the incident opined that he and his men zoomed into the community and have since arrested 12 persons.

He added that the suspects are being processed and will be put before court soon.