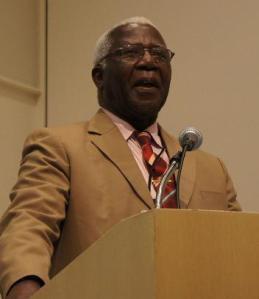 A former Chair of the Subsidiary Body on Science, Technical and Technology Advice to the United Nations Convention, Prof. Alfred Apau Oteng-Yeboah has asked government to reconsider its decision on the bauxite mining deal in the Atewa Forest.

He has therefore appealed to President Nana Addo Dankwa Akufo-Addo and his cabinet, many of whom he said come from the area, to reconsider Atewa’s future and remove it from the list for exploitation.

He is worried about why a globally significant biodiversity area with multiple benefits and great potential for ecotourism, should be exploited in exchange for the US$2billion from the Chinese for the purpose infrastructural development.

According to him, the climate buffer which residents of the area have enjoyed over the years as a result of the Atewa Mountain contributing to climate regulation was now under threat.

“Why should a precious, unique and priceless site such as Atewa be destroyed and who will account for the water and the endemic animals and plants, many of which were yet to be scientifically discovered and named?

“Who will follow the removal of rocks which predate our current age, mark and study them to provide an account of their history?

According to him, the scenario points to a bleak future where a place that was once a prosperous production socio-ecological landscape was now being turned into a zero-production area.

Prof Oteng-Yeboah in an interview, indicated described the Atewa Forest as sacred and a total embodiment of the soul and spirit of the Akyem Abuakwa people which should be protected.

Prof Oteng-Yeboah who retired at the Department of Plant and Environmental Biology at the University of Ghana, Legon, noted that there were many questions to ask whose answers may never be found and that he was aware of work done on the ecosystem valuation of the Atewa in terms of its contribution to human wellbeing which far outstrips any destructive and unsustainable economic endeavour that would involve the removal of the mountain.

This he said was where the Precautionary Principle enshrined in Agenda 21, which is the forerunner of the current global Agenda 2030 and the AU 2063 should be invoked.

He said what the Ghanaian should know was that once the forest is exploited; the contributions that this natural resource provides to the people of Akyem Abuakwa and Ghana at large will be lost forever.

The Retired Professor said Ghanaians should be made to know that, no jobs will be created with the mining exploitation and that there is nothing like scientific mining anywhere without destruction, as quoted falsely by some government officials.

He said studies by colleagues in the Birim, Densu, and Ayensu basins in the Eastern and Central Regions respectively, indicate extensive land degradation, pollution and silting of rivers and streams which have exacerbated extreme poverty for the local people who subsist on peasant farming because of changes in the landscapes.

He believe that his appeal, which is based on scenario predictions, will receive urgent attention, adding, “I foresee, in two to three decades time when our present generation would have left the scene, and the new generation has taken over, these places will be in total desolation.”

“It will not be easy for them to survive. We would have failed in living to the tenets of sustainable development, whose beginnings were vigorously promoted by Nana Sir Ofori Atta I, the Okyenhene, in many of his writings and speeches to the citizens of this country”.