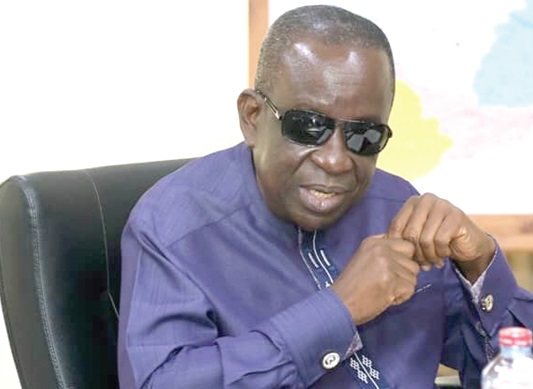 The government is to install 10,000 more CCTV cameras and cellular technologies at vantage areas in all regional and district capitals across the country to enhance the operational efficiencies of the security and intelligence agencies, the Minister of National Security, Mr Albert Kan-Dapaah, has told Parliament.

He said the project would also provide for the installation of CCTV cameras in 432 out of the 900 regional, divisional and district police stations across the country.

The project followed a contract agreement the government, through the Ministry of National Security, signed with Huawei Technologies and the China Machinery Engineering Corporation in 2018 to implement the second phase of the Integrated National Security Communications Enhancement Project (Alpha Project – Phase1).

He said while the project commenced in January 2020 and was initially scheduled to be completed in 18 months, logistical challenges sparked by the coronavirus disease (COVID-19) pandemic had pushed the project completion to December 2021.

Responding to a question on the floor of Parliament yesterday, Mr Kan-Dapaah said: “To date, the installation of about 6,500 cameras has been completed, with a little over 4,000 cameras powered and online, mainly in Accra, Kumasi and other regional capitals.

“This installation has aided us to detect many infractions and criminal activities, including helping us solve recent violent crimes such as armed robbery and kidnapping.”

“Even as brisk efforts are made to complete the existing phase, the relevant planning works are also being carried out to pursue additional phased deployments of cameras to cover the outstanding areas that cannot be served under this phase,” he assured Parliament.

The National Security Minister was responding to a question by the National Democratic Congress (NDC) Member of Parliament for Wa West, Mr Peter Lanchene Toobu, who had asked about the project in which CCTV cameras were to be fixed in all police stations across the country.

Responding, the minister told the House that the Ministry of Communications and Digitalisation, on behalf of the government, had signed a contract with Huawei Technologies in 2012 for the commencement of the first phase of the Alpha Project – phase1.

That phase of the project, he said, delivered about 800 CCTV cameras in Accra, Kumasi, Takoradi and some critical border areas such as Aflao, Elubo and Paga, as well as other critical national installations and some major towns across the country.

“That project was largely successful, enhancing the communications of the various agencies and assisting to detect crime, road infractions, supporting major public events and providing evidence to support investigations and the prosecution of many cases where some details were captured by the CCTV network,” he added.

Mr Kan-Dapaah further told the House that an assessment of CCTV deployments across the world indicated that countries with enhanced security had a greater saturation of cameras per citizen for security and surveillance purposes.

“Ghana is currently doing less than one camera for every 1,000 citizens and the nation needs to make the relevant investments in the sector to enhance our security.

“It is expected that the phased approach by Ghana will enable us to deploy the right level of CCTV camera saturation that will make us more effective and efficient in delivering a safer Ghana in which to live and conduct business,” he said.