A 51-year-old man Oppong Kwaku Owusu is facing prosecution after he allegedly expelled 100 pellets of some powdery substance suspected to be cocaine. This follows his apprehension by officials of the Narcotics Control Board (NACOB)on Tuesday, February 18, at the Kotoka International Airport. A statement issued by NACOB, and copied to the Ghana News Agency, […]

Videoed in a room filled with Nazi memorabilia, this is the moment a Roman Catholic priest snorted a line of cocaine at a party in his house on church grounds. Father Stephen Crossan, 37, is said to have sniffed the class A drug through a £10 note at the end of a night of drinking beers […]

Ashley Abrahams, a 37-year-old homeless man, is one of over 100,000 regular heroin users in South Africa, according to a survey published in March by European project ENACT, which fights organised transnational crimes. Heroin has been wreaking havoc in South Africa’s cities and rural areas since the early 2000s, with a trafficking market generating about […]

Over the past few months, bricks of cocaine with a street value of millions have been washing up in eastern coastal provinces in the Philippines. In the latest incident, seven suspected cocaine bricks were found floating near a beach in Quezon province on Sunday. And in May, 39 bricks with an estimated value of more […] 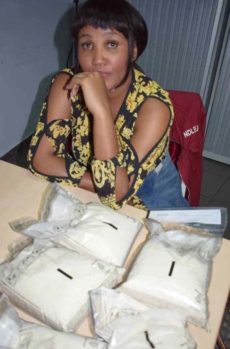 The National Drug Law Enforcement Agency, (NDLEA) has arrested a Kenyan lady, Angela Wairimu, who tried to smuggle 6.5 kilogrammes of cocaine into Nigeria through the Abuja airport. She was arrested on arrival from South Africa aboard Ethiopian Airline flight to Abuja with the illicit substance concealed in the false bottom of a travelling bag […]